The value of dead wood 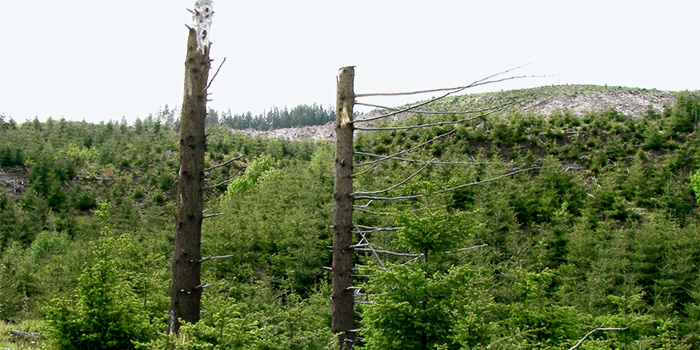 I recently attended a conference on “Wildlife in Managed Forests” sponsored by OFRI, the Oregon Society of American Foresters and the Oregon chapter of The Wildlife Society. Speakers discussed current research on wildlife damage and wildlife habitat enhancement projects across western Oregon and Washington. There was far too much interesting stuff to relate in this space, so in this post I’ll focus on one recurring theme of the meeting: dead wood.

One of the easiest and most effective ways to maintain a wildlife-friendly forest is to retain dead wood as snags (standing dead trees) and down wood (logs on the ground).

Nearly 100 species of animals in Oregon – mostly birds – use snags. First, birds such as woodpeckers forage on insects living in these trees and then excavate cavities in the trees for nesting. Later, these cavities are used by other birds and mammals for nesting and shelter. Raptors such as hawks may also use snags as perches, from which they can prey on voles or other mammals.

With snags, the rule of thumb is “bigger is better” – smaller-diameter snags will only be used by smaller animals and do not last as long. So if scattered trees die on your property, consider leaving them for wildlife, keeping safety in mind. Snags can also be created artificially during harvest. Mechanical harvesters can top trees up to 20 feet or so, and so can create a snag out of a tree with a defect down low but a merchantable top. The second-best option, if you cannot safely cut the tree up high, is to fell the tree and leave the defective portion in the woods where wildlife will use it. Now it has become “down wood.”

Just a few days after the workshop, I visited a landowner near Rainier. A small harvest had just been completed, and the logger had left a big, defective log alongside the unit. The owner wondered, could it have been sold as a pulp log? Should she see if someone wanted it for firewood? I suggested that the log was already providing value, and probably more than what might have ended up in her wallet from these potential uses. Down wood is used for cover, travel corridors and breeding spaces, and is especially important for amphibians such as newts.

The naturally regenerated alder in the background had come in after a harvest that had left little to no wood on the ground. The foreground will soon be planted back to conifers, which will take decades to reach a size that will provide a new source of snags or down wood. By carrying over some down wood like the log in the photo from one forest generation to the next, a landowner can ensure some continuity of these wildlife-friendly habitat elements. Consider not disturbing down logs that are already in your forest. They’re playing an important role – and besides, your equipment may take a beating if you try to move them or run them over!

Have you created or left snags or down wood on your property? Do you have evidence of wildlife using these structures? I would like to create a photo gallery. Send me a photo of dead wood in your forest with a description of how it came to be or what wildlife you think is using it. If I get enough responses, I’ll share them all in a future article.

For more information on managing for wildlife, check out “Wildlife in Managed Forests: Oregon Forests as Habitat,” published by OFRI. You can find it and many other publications about forest wildlife at KnowYourForest.org.

More 〉
At home with my forest 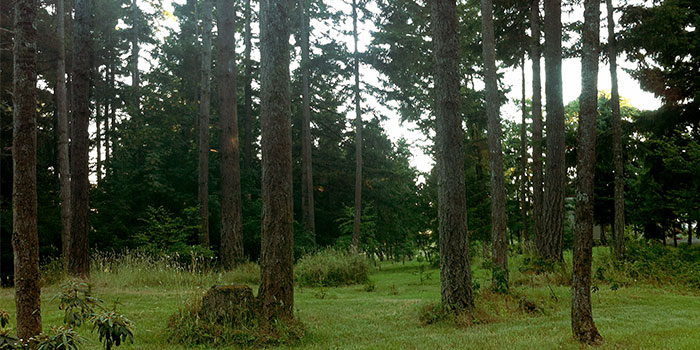 Managing our 89 acres of timberland out in the Coast Range is one thing, but taking care of the forestland that we live on raises different concerns. Fire, for instance, takes on a new meaning when your home is on the property.

About three years ago we moved from Forest Grove out to a 5.5-acre lot in the woods on the edge of town.

In the area immediately around the house, we cleared out overgrown berry vines, a couple wooden structures and some smaller trees. We also removed any low, dead branches from the bigger trees.

The idea is to remove excess fuel to create a “defensible space” around your home – so if there’s a fire, you reduce the chance that flames reach the building.

We also need to keep trees growing on the lot if we’re to maintain the land’s “forest deferral,” which sets a reduced property tax rate for forestland. The previous owner had logged most of the larger trees, so we’ve planted 200 Douglas-fir seedlings.

That previous owner also had planted western redcedar, which we’re having trouble with. The deer just love them.

Did I mention the deer? They’ve been a challenge, too. There are about 15 of them on the property, and they seem to eat even the “deer-resistant” plants.

But we’ve been having some luck spraying a mixture based on porcupine and bovine blood onto trees and plants. It has to be reapplied every month or two – and it stinks when you’re spraying it – but it does seem to help. Apparently the deer associate the smell with predators being nearby, so they go find someplace else to eat.

Nevertheless, we built a 7-foot deer fence around a 1.5-acre area right near the house, to keep the deer from eating plants in the yard. It also helps keep the dog from going off and getting into another fight with a porcupine…

It’s been an adventure.

More 〉
Arizona burning: We have met the enemy. . . 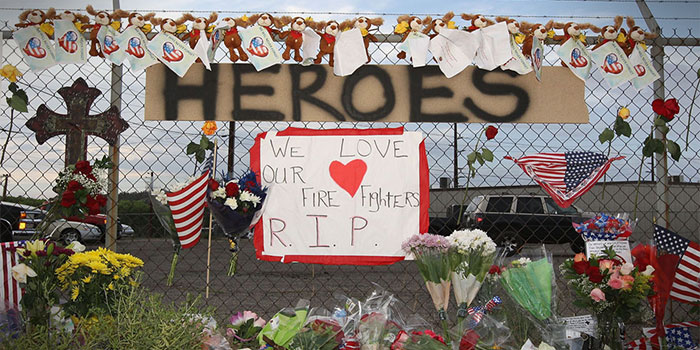 No doubt, in the aftermath of Arizona’s Yarnell Hill Fire that tragically killed 19 hotshot-crew firefighters, the media and others will look to assign blame.

To me the answer is obvious: We all are.

It’s the same answer that Pogo cartoonist Walt Kelly penned in 1970 when he created a poster commemorating the first Earth Day: “We have met the enemy, and he is us.”

Past policy decisions haunt us, from the U.S. Forest Service’s 1935 “10 o’clock rule” to put out every fire by 10 a.m. the next morning, to the 1994 Northwest Forest Plan, subsequent east-side screens and other regional efforts to limit timber harvest in order to spare larger and older trees. Another haunting reality is that many of us have moved closer to our cherished forests because we love them – but when fire threatens, it is our homes, our property and our very lives we want protected.

It may be a part of our biologic makeup: We fear fire and the wanton destruction it can cause. We’re also in love with our forests and big trees.

But the answer isn’t less forest management. There has to be more, and it has to be smarter.

Less than a month before the Yarnell blow-up, a possible middle-ground solution emerged – interestingly, also from an Arizona source. Diane Vosick, director of policy and partnerships for Northern Arizona University’s Ecological Restoration Institute, testified before Oregon Sen. Ron Wyden’s Committee on Energy and Natural Resources. She stated that the costs of active forest management can be repaid many times over in reduced severity and losses from wildfires.

“The question becomes, can we afford not to treat?” she asked.

I met Diane several years ago, when she worked for The Nature Conservancy here in Oregon as TNC’s east-side restoration coordinator. She was very helpful as OFRI wrote and published its special report Federal Forestland in Oregon: Coming to terms with active forest management of federal forestland.

Diane told Sen. Wyden and his committee that the best way to save money is to invest a little now in forest management. She presented a recent study by her institute, “The Efficacy of Hazardous Fuel Treatments.” While the research is specific to Arizona, its implications reach to Oregon.

Her conclusions are the same reached last year here in Oregon in a blue-ribbon study sponsored by a diverse group of statewide stakeholders, including conservationists, businesses, state agencies and counties: National Forest Health Restoration: An Economic Assessment of Forest Restoration on Oregon’s Eastside National Forest. Doubling the investment in forest restoration activities such as thinning and selective timber harvest can reinvigorate rural communities, reduce poverty and restore forest health and fire resiliency, the report concluded. In the process, restoration can protect wildlife habitat as well as clean air and water.

As the nation mourns the death of the 19 brave firefighters in Arizona, my hope is that we will realize that extreme positions – whether it’s no fire, no management or no timber harvest – all have unintended consequences. Let’s find the middle ground and invest in smart forest management to make sure a tragedy like this never happens again.

More 〉
Pileated in a palm? 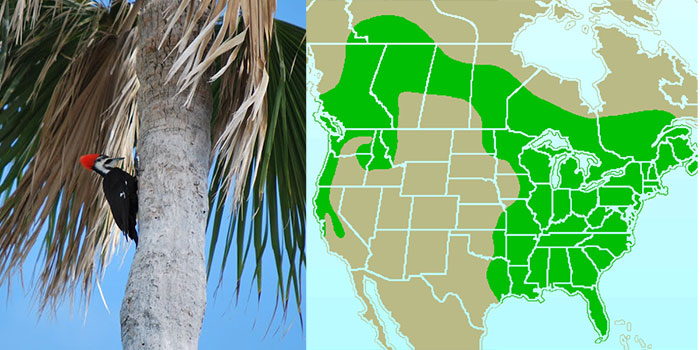 One of my favorite animals is the pileated woodpecker. What’s not to like about the noisy bird with the zebra-striped head and neck, long bill and distinctive red crest?

The pileated is Oregon’s largest woodpecker, but it’s relatively shy and not commonly seen. So any day I’m walking in a stand of oak or in a Douglas-fir forest and I see a pileated woodpecker, it’s a good day.

Recently, I was vacationing on Sanibel Island in Florida. This barrier island has a subtropical climate and white sand beaches. It’s nothing like the Douglas-fir forests of Oregon.

So imagine my surprise when I heard a familiar sound, looked into a palm tree and saw two pileated woodpeckers. What were they doing in a palm tree?

Well, pretty much the same thing they do in a Douglas-fir tree: making powerful strikes with their heavy bills, pulling with their feet to increase the strength of the blow and excavating long oval holes (up to several feet long) in the tree trunk in search of insects, or to make a nest.

It turns out I shouldn’t have been surprised to see them. Looking in a field guide I found that pileated woodpeckers live in mature deciduous or mixed deciduous-coniferous woodlands of nearly every type, from tall western hemlock stands of the Northwest, in a broad swath across Canada, to beech and maple forests in New England and down to the cypress swamps of the Southeast.

I had just assumed this beautiful bird was “ours.”I guess we have to share it.

You can learn more about pileated woodpeckers and how to create habitat to attract them in OFRI’s publication “Wildlife in Managed Forests.” Find it on our Resources page.