Heated disagreements involving forest management are not new to Oregon. Neither are shared values, creative problem-solving and the spirit of compromise. In early 2020, Gov. Kate Brown announced that representatives from the forest and wood products sector and representatives from environmental and fisheries communities had been in discussion, and agreed to try a new path forward in determining the future of many of Oregon’s private forest practices.

Later that year, the Oregon Legislature passed a bill (SB 1602) jointly recommended by representatives of the timber industry and the conservation community that made some immediate changes to the Oregon Forest Practices Act, related to stream buffers and helicopter pesticide application and notification.

At the same time, the bill memorialized a series of moderated discussions among the opposing groups, called the Private Forest Accord. The legislation laid the foundation for a mediated process that would foster constructive discussion and review available science related to the impacts of contemporary forest practices on fish and wildlife habitat. Their goal was to determine the best ways to mitigate negative impacts of logging on streams and fish, while establishing regulatory certainty for forest management.

Representatives agreed to meet regularly and earnestly for the better part of a year. They talked. They expressed their concerns and their representative goals. They honored opposing viewpoints and listened. They reviewed science, they called in experts and they determined key goals that should allow Oregon to receive federal approval for a Habitat Conservation Plan on private forestlands.

A habitat conservation plan and accompanying incidental take permit on private forestlands would offer assurances of protected habitat for fish and other aquatic species, and provide future regulatory stability for Oregon’s forest sector.

In October 2021, timber and environmental representatives signed the Private Forest Accord agreement.

2010-2020
Legislative battles over Oregon’s forest practices regulations on private forestlands were getting more expensive and more divisive. Competing ballot initiatives from the forest industry and conservation communities were prepared for the 2020 Oregon legislative session.

Feb 10, 2020
Governor Brown announces a memorandum of understanding (MOU) between representatives from the state’s forest sector and major environmental and fisheries groups.

The MOU signified a willingness to collaborate toward meaningful, science-based forest management on Oregon’s private forests. It was a show of good faith on both sides.

The parties that signed the MOU agreed to withdraw all forestry-related initiative petitions and related litigation. In addition, the signed MOU did three things – it:

The legislation also established the Private Forest Accord (PFA). This is an agreement between forest sector and environmental representatives, along with the office of Gov. Kate Brown. The PFA is not a set of recommended laws, but instead a series of mediated meetings held between members of this diverse group of forestry and environmental stakeholders, and eventual subcommittee efforts to develop proposed changes to the regulations governing Oregon’s private forests and forest practices.

SB 1602 also helped establish the funding for coordinating and moderating the accord discussions, and established parameters and guidance for the coming mediation.

Jan 12, 2021
Private, mediated discussions began. Timber interests and environmental groups each designated six representatives to participate in the PFA discussions. Their task was to discuss goals and evidence as well as proposed changes to the Oregon Forest Practices Act, and decide how to move toward securing a statewide Habitat Conservation Plan.

Peter Koehler was appointed mediator of the negotiations, assisted by Peter Harkema.

October 30, 2021
An agreement was reached in the Private Forest Accord.

Ten documents were prepared to provide summaries of the issues covered in the agreement.

The parties agreed on a framework for:

Language agreed to by the PFA participants was submitted for consideration to the 2022 Oregon Legislature, to solidify the PFA’s suggested changes into statute.

Feb. 2022
PFA participants presented a detailed Private Forest Accord Report to the Legislature, along with draft legislative concepts.

Senate Bill 1501
Directs the State Board of Forestry to adopt updates to the Oregon Forest Practices Act.
Key sections:

Senate Bill 1502
Creates a tax credit program to compensate small forest landowners (those who own less than 5,000 acres and harvest less than 2 million board feet of timber a year) who agree to exclude harvest within the proposed expanded stream buffer zone for the next 50 years. The individual tax credit will be based on estimated lost timber harvest.

House Bill 4055
Establishes future funding under the Forest Products Harvest Tax. Upon approval of a Habitat Conservation Plan, funds would be collected for an Oregon Conservation and Recreation Fund and be available for funding mitigation.

Senate Bills 1501 and 1502 and House Bill 4055 passed. Now the Oregon Board of Forestry is tasked with integrating the regulations outlined in the bills into the Oregon Forest Practices Act, and establish new forest practice rules for private forest landowners under the Act. 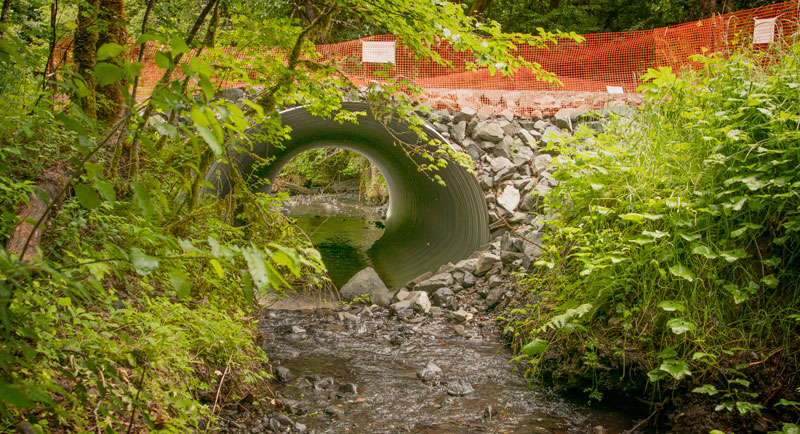 Mar. 2022
Oregon Legislature approves Senate Bills 1501 and 1502, and House Bill 4055. Suggested changes move to the Oregon Department of Forestry. The department's role is to draft new rules and regulations for the Board of Forestry to consider.

Oct. 2022
The Oregon Board of Forestry approved more than 100 changes to the Forest Practices Act, based on the recommendations of the Private Forest Accord report. The changes will impact timber harvest activities on more than 10 million acres of private and non-federal forests in the state.

In addition to rule changes, recent legislation also funded the creation of a small forestland owner assistance office, establishment of tax credits to small landowners, started the development of a habitat conservation plan for aquatic species and made investments in training and outreach.

The next long-term process will be developing and pursuing a statewide Habitat Conservation Plan for private forestlands in Oregon. The Oregon Board of Forestry will oversee the plan, and then present it to federal fish and wildlife agencies for approval under the Endangered Species Act.

Most of the rules and programs developed as a result of the PFA and legislative action roll out in 2023-24. Additional rules will be developed in the coming years. A Habitat Conservation Plan is targeted to be completed by the end of 2027.

OFRI has developed three topic sheets to help explain some of the finer details of the Private Forest Accord to the small forestland owner community. We welcome you to read and share these with your community.

Private Forest Accord and Habitat Conservation