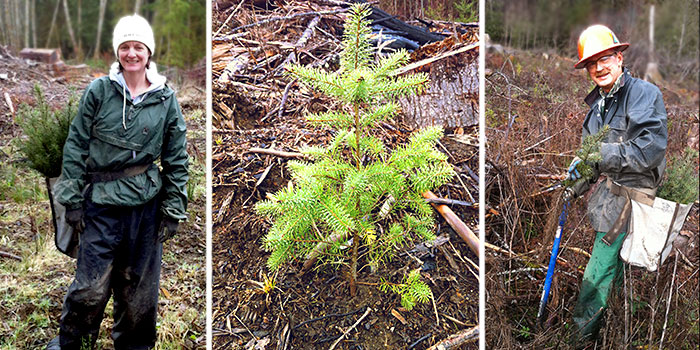 Planting and growing trees isn’t a risk-free proposition. Besides the obvious threat from wildfire, there are a diseases, root rot, deer, elk and even bears that can put a ding in your plans. But mostly, in western Oregon we rarely worry about weather.

However, this year’s warm, dry summer took a toll on our seedlings. By the time rain fell in September, it was too late for most of the trees my husband and I planted last winter. At our home, 60 percent are brown and dead. We haven’t yet traveled to our timberland near Mist in the Coast Range to check their status but hopefully we’ll see a higher survival rate since most were planted two winters ago.

This winter only 120 Douglas-fir seedlings will be planted on both properties – one bagful – which makes this tired tree planter happy.

My dream for next year? No winter planting! Wish us luck. 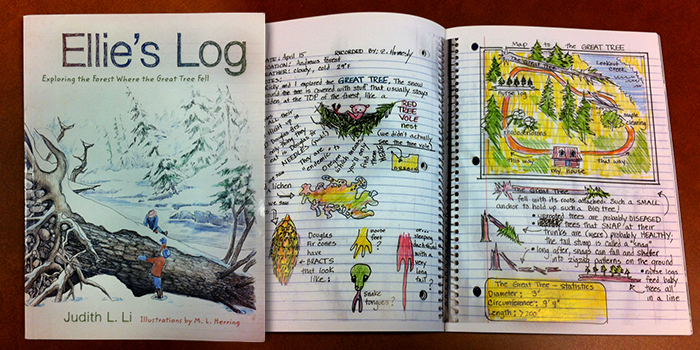 In the new children’s book Ellie’s Log, a curious 10-year-old and her friend go into the forest to explore after a huge tree crashes to the ground.What Ellie and Ricky discover is a rich forest ecosystem. They examine decaying trees, spot many different kinds of wildlife, and keep track of their observations in a field notebook.

Ellie’s Log was written by Judy Li, a retired associate professor in the Department of Fisheries and Wildlife at Oregon State University. The book’s forest setting is based on the ecology of the H.J. Andrews Experimental Forest in the Oregon Cascades, where researchers have been studying forests and streams for decades.

Li’s story is a great mix of adventure and science.The end of each chapter includes pages from Ellie’s field notebook, and these serve as models for students to take field notes of their own to record observations.

The 112-page book is aimed at 9- to 12-year-olds and is perfect for teachers who look for ways to bring literature, writing and the sciences together in the same project.There is an accompanying website, ellieslog.org, which includes a teacher’s guide and other resources.

The book is available from OSU Press as well as amazon.com.

Li is a stream ecologist, with a special interest in stream insects. She is currently part of a research team studying seasonal changes in conifer forests, invertebrates in headwaters where trees are being harvested, and aquatic food webs of bugs, trout and songbirds. 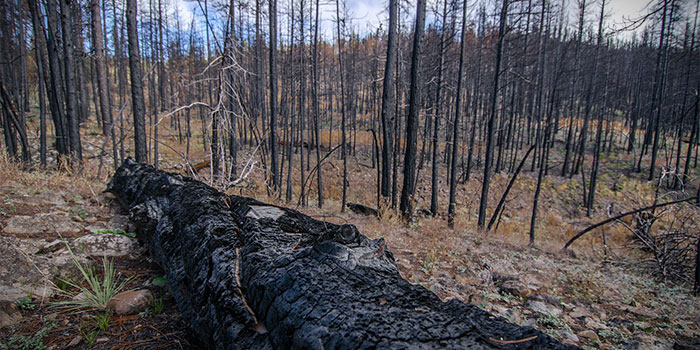 As soggy as it’s been during September and early October, let’s remember that the 2013 wildfire season began early and looked like it would linger well into fall. Last June, Oregon’s wildfires captured national media attention as breezy, dry weather and fuel-laden forests combined to produce dramatic images that were flashed across the nation – at least, that is, until the still-smoldering Rim Fire burned into Yosemite National Park.

Then in September, the weather turned on a dime. Record rainfall doused flames. Portland received better than six inches of precipitation, and totals along the coast were much higher. Just like that it was over: Fires were out.

After the warm, dry summer, The Oregonian newspaper dutifully reported the weather phenomenon. The story in the online edition followed up with a series of blog posts in which self-appointed experts battled one another for the rhetorical high ground.

One two-word post was simple enough: “Global warming,” the anonymous blogger said, was the cause of the heavy rain. The predictable back-and-forth rant that followed was about the truth or fallacy of climate change.

Last week, I was reminded of that two-word blog as we drove through the Willamette and Deschutes national forests on the way to Lakeview. With fire season a fresh memory, most of these over-dense stands of trees looked like so much firewood rather than intact, healthy forests. Global warming – climate change – will no doubt have an impact on those trees in the future.

In Lakeview, OFRI’s board of directors hosted a tour of the 93,000-acre Barry Point Fire that during 2012 destroyed huge swaths of mixed-conifer forests, some of which were within the Fremont-Winema National Forest and the rest on private forestlands owned by The Collins Companies and other small forest landowners. It was a bad one. The fire started on a hot, dry August day in 2012. The cause was dry lightning, which experts say comes in concentrated bursts as thunderheads deliver electric jolts to treetops while scarce rain evaporates before reaching the bone-dry forest floor. Worse, these lightning-caused fires often start in remote places that are hard for firefighters to attack.

Such was the case with the Barry Point Fire. It was spotted soon after it started, but the conditions were ripe for fire, and it doubled in size quickly – and then doubled again and again. Typically, fires in that region travel from southwest to northeast, but the fates played another wild card: Winds came from the north, pushing the fire south as it galloped through public and then private forestlands.

Later, traveling back through south-central Oregon, we saw the remains of other fires – thousands of acres of bleached, standing snags from long-past conflagrations. Over Santiam Pass we saw the remains of the 2003 B&B Complex Fire that burned an area equivalent to that of the Barry Point Fire.

Our tour covered many details of the Barry Point Fire, which because of its remoteness did not draw much media attention. If asked, most Oregonians wouldn’t even remember it.

One large takeaway for me: that particular forest has seen extensive work by the local collaborative, the Lakeview Stewardship Group, to find common cause for how to treat the Fremont-Winema National Forest. Thinning to restore the forest has gone on for several years, but the Barry Point Fire didn’t happen in the restored stands. Ironically, rather than burning in forests already treated to restore fire resiliency, the Barry Point Fire burned up the next three years’ thinning projects. My hope is that Oregonians who work within these collaborative groups get to see their work fulfilled, and that wildfire can again fulfill its proper role in Oregon’s forests. 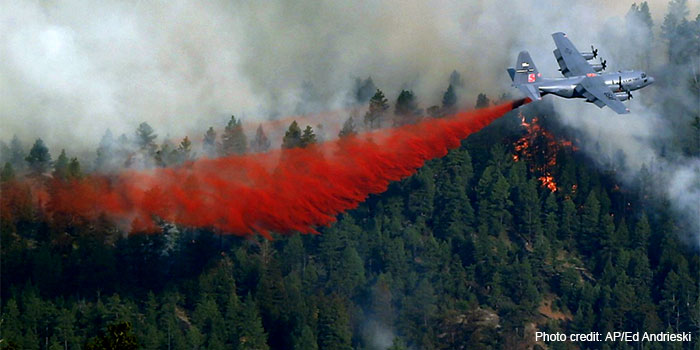 By late August, the US Forest Service had exhausted its firefighting budget for the year. A billion dollars spent, and there were still about 50 large, uncontained fires burning nationwide.

So the Forest Service transferred $600 million from other purposes – such as recreation and timber management – to fund firefighting for the rest of the season. They didn’t have much choice, really; in many cases homes and communities were at stake.

But let’s remember a few things:

Nationwide, the USFS did preventative work on 1.8 million acres in 2012. Less is happening this year. And next year’s budget provides funds for still fewer acres – down to 685,000 nationwide. In Oregon alone, there are millions of acres of national forest in need of restoration.

All this was reported in a recent Associated Press news story, and anyone who read it certainly must have had the same thought: What are we doing wrong?

Certainly, the Forest Service understands the irony. And so do many of our political leaders in Oregon.

Gov. John Kitzhaber, for instance, has compared this to problems in health care. He said it’s like not paying a relatively small amount to control someone’s high blood pressure, and then paying tens of thousands of dollars to treat that person in the hospital after he or she suffers a stroke.

In Oregon, we’ve had some success using collaborative groups to plan forest restoration projects that can help prevent expensive fires, with interests as diverse as environmentalists and mill owners working together. A Forest Service study released this year shows these projects do reduce costs.

Restoration of National Forest lands is something that can be resolved; not easily, however. The US Forest Service cannot do it alone, as has been demonstrated over the last two decades.

This is a problem of federal policy and federal funding. It’s going to play out in Washington, D.C. – in the Obama administration, in Congress and high up the food chain in the Agriculture Department.

OFRI’s 2012 Forest Report has as its No. 1 recommendation: “Reassess and reshape policies for Oregon’s federal forests.” It points out that “This is a tall order … not achieved with a single ‘summit’ or with a 90-day planning effort … A sustained bipartisan effort is needed.”

As our elected officials address forest policy, we need to focus on substance – avoiding the rhetorical and supporting sensible outcomes as our congressional delegation works through this conundrum.