We have seen the future, and it smells like smoke 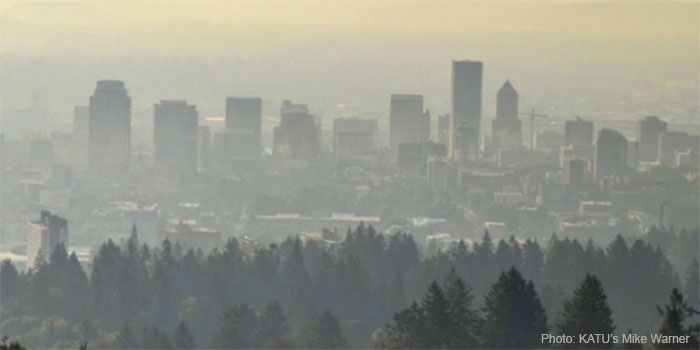 I don’t know about you, but the August incursion of smoke from wildfires burning in British Columbia gave me a sore throat and a headache. I felt bad for children, the elderly and people with breathing issues.

Researchers at University of California, Merced collaborated with colleagues at the University of New Mexico and Penn State University to study increasingly severe wildfires in the forests of California’s Sierra Nevada mountain range. Relying on three climate models and data from the Intergovernmental Panel on Climate Change, they concluded that “changing conditions will turn Sierra Nevada forests into tomorrow’s greenhouse gas emitters,” according to a UC Merced news release.

Rising temps are creating a warmer, drier Sierra Nevada climate. According to UC professor LeRoy Westerling, these changes are leading to dramatic increases in the frequency, size and duration of wildfires.

That’s not great news. Nor is a study from the Georgia Institute of Technology published in ScienceDaily June 14, 2017, that found “summer wildfires boost air pollution considerably more than previously believed.”

According to the study, burning timber and brush expel fine particles into the air at a rate three times as high as levels cited in emissions inventories by the U.S. Environmental Protection Agency. The uncontrolled burning of biomass, where the pollution cannot be captured by modern technology, produces “lots of pollution,” says Greg Huey from Georgia Tech. Unlike the EPA studies, which measured emissions in controlled burns, researchers sent high-tech NASA airplanes to plow through actual wildfire plumes to gather real-time data.

It’s not just fine particles we’re breathing when a forest goes up in flames, according to Georgia Tech. “Methanol, benzene, ozone precursors and other noxious emissions collected from wildfire plumes may make it sound like an oil refinery went up in flames,” the ScienceDaily article warns.

But how bad can it be, really? I guess we’re about to find out.

In southern Utah, the Brian Head Fire consumed nearly 72,000 acres over a 30-day period in June and July. This year and last, the Department of Atmospheric Sciences at the University of Utah put pollution-gathering equipment aboard a news helicopter as it captured video from the raging fires.

“We are just seeing tremendously high particulate concentrations,” says Erik Crosman of the University of Utah. He adds that these are concentrations more than three to five times above the allowable health standards.

What’s the solution? More active management of our federal forests. Restore forests to renewed health and resiliency. We cannot continue to suppress wildfires while not actively managing the fuels on the ground, especially in areas that are close to human inhabitation. But even that, as we’ve seen – or smelled – the past month here in Portland, won’t be enough to stop periodic incursions of smoke and diminished air quality. 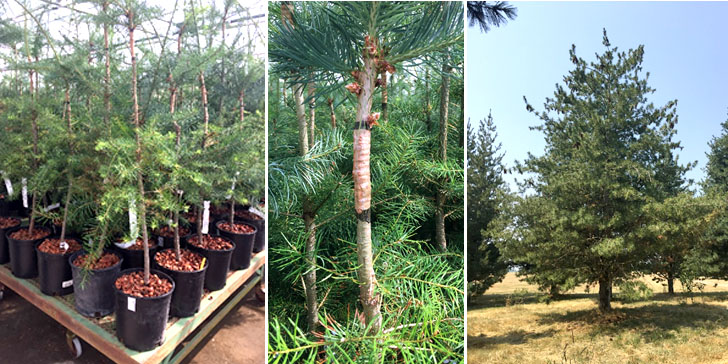 Thanks to my friends at the Bureau of Land Management, I recently had the opportunity to tour the Walter H. Horning Tree Seed Orchard near Colton. This 600-acre seed orchard is managed by the BLM, but also produces seed for several timber companies, the U.S. Forest Service and even a couple Christmas-tree growers.

When we first started planting seedlings in the 1940s and ’50s to reforest areas in Oregon that had been logged or burned in wildfires, foresters collected seeds from any tree in the forest. But they quickly observed that some trees grow much faster than others, even on similar sites, and came up with the idea of growing seedlings using seeds from only the best trees.

Modern tree-breeding programs and the use of seed orchards to produce improved seed were the next steps. In the late 1960s, foresters started collecting cuttings from the best trees in the forest and growing these to produce seed in an agricultural environment.

The Horning Seed Orchard was started in 1968. Together with the BLM’s Tyrell Seed Orchard near Eugene and the Oregon Department of Forestry’s Schroeder Seed Orchard near St. Paul, it produces most of the conifer seed used in Oregon. The majority of the seed produced at Horning is western Oregon Douglas-fir. Seeds from other species produced there include sugar pine, western white pine, noble fir, western hemlock and western redcedar.

The seed production process is very interesting, and very detailed. Cuttings are made from branch tips in the upper crowns of the selected parent trees. These cuttings are then grafted onto root stock, which has been specifically selected for grafting success. The resulting “graftlings” are grown in a greenhouse in pots until the grafts are healed and the young trees can grow in the orchard.

The graftlings are then planted outside in the seed orchard. Once the trees are well established, they are periodically stressed by partial girdling, root pruning and plant-hormone injections, to get them to produce seed as early as possible. Seed-orchard Douglas-firs can produce significant amounts of seed by age 15. Woods-grown Douglas-firs don’t produce much seed until age 40 or so.

The cones are then collected by hand using lift trucks when they are nearly mature, but before they open and cast their seed to the wind. Cones are stored in burlap bags and placed on drying racks in a rodent-proof drying house until they are dry enough for processing. Seed is extracted from the dry cones and stored in a freezer until it is needed to grow seedlings.

Seed at Horning is generally produced by open pollination, where the pollen comes from any and all of the trees in the block. In special cases, such as disease-resistant western white pine, controlled crosses are made where pollen is collected from certain trees and used to pollinate cones in other trees.

I want to point out that these improved trees are not genetically modified. They are produced using standard breeding techniques, where the healthiest and fastest-growing trees are used to produce future seed. Even with these fairly simple breeding techniques, genetic-gain verification trials have shown specially bred trees grow bigger in a faster amount of time, gaining 15 to 20 percent more wood volume at age 20 than those grown with woods-run seed.

So the next time you see a wonderful stand of conifer trees, remember to thank the BLM and ODF for the great work they do at their seed orchards, producing improved conifer seed to grow future forests that will provide us with wood products, wildlife habitat and scenic beauty, among other benefits. 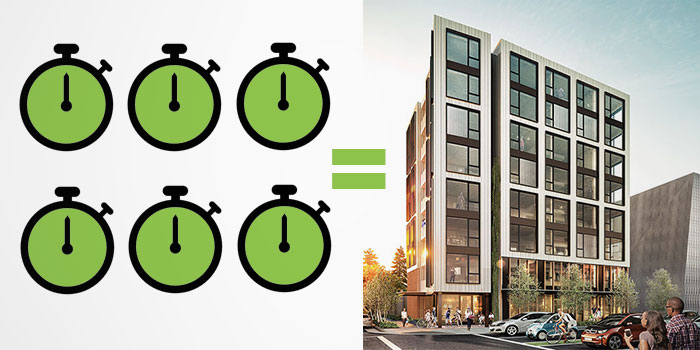 Recently, a team of researchers produced a report intended to identify ways to accelerate cross-laminated timber (CLT) manufacturing in Oregon and southwest Washington. Among the topics addressed is whether the region has sufficient capacity to provide the raw material needed for an expanded CLT industry.

The short answer to that question is yes.

For one thing, the raw material for CLT and other mass timber products is lumber, not logs. Like most commodities, the lumber market is global, which means even if Oregon did not have the forest resources to support ample lumber production here, CLT manufacturers could simply import lumber from other states and other countries to meet their needs.

But the question was really about forest capacity. Again, the answer is yes, there is plenty of timber growing in our forests to support a robust advanced wood products industry – all while managing these forests sustainably. The forests of the Pacific Northwest are among the most productive in the world. That productivity occurs whether or not we choose to capitalize on it.

To put this into perspective, it took Oregon’s forests about six minutes to grow the more than 300,000 board feet of wood products, ranging from two-by-fours to CLT panels, needed to build the eight-story Carbon12 condominium project in Portland. Carbon12 will be the tallest wood structure in the U.S. when it’s completed later this year, and our forests produce enough timber to build many more like it. Oregon timberlands, which exclude forestland where logging is restricted such as parks, reserves and wilderness areas, grow enough wood in one day to build more than 200 Carbon12s.

Some might argue that the harvest levels of the past cannot be sustained in the long term; others might disagree. Yet here we are, after a full century of harvest levels 50 percent greater than today’s volumes, and Oregon still has 386 billion board feet of timber growing on nearly 24 million acres of timberland – volume and acreage figures that have remained relatively stable for decades.

So, yes, there is plenty of wood to support a robust mass timber industry in Oregon. And we have the know-how to manage timberland sustainably while also protecting other forest values such as water quality, wildlife habitat and recreation.

The question we should be asking is whether and how much of our timber resource we’ll choose to use, to not only spur economic growth in rural communities, but also foster greater sustainability in the built environment. 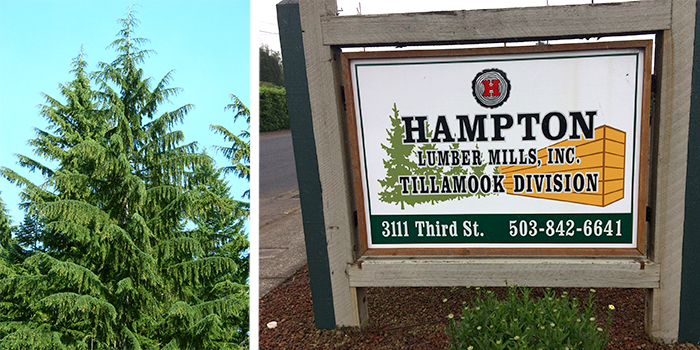 I had the opportunity during last month’s OFRI-sponsored Western Oregon Sustainable Forestry Teacher Tour in Tillamook to visit forestlands managed by Stimson Lumber Co. and the Oregon Department of Forestry as well as tour a Hampton Lumber sawmill. I came away from the tour with the impression that western hemlock is the super tree of the Oregon Coast.

At Stimson Lumber’s Tillamook Tree Farm, we toured a very well-managed forest made up primarily of hemlock with a mixture of western red-cedar, Sitka spruce, Douglas-fir, red alder and big leaf maple. It was clear that western hemlock was the species of choice on the site because the trees responded well to management, grew to a large size in a relatively short time and produced high timber volumes per acre compared to other species.

At Hampton Lumber, we toured a sawmill that handles only western hemlock logs and is well-positioned in the heart of Oregon’s coastal hemlock forests. This dimension lumber mill produces 2-by-4, 2-by-6, 2-by-8, 2-by-10 and 2-by-12s of various lengths, plus some larger, 4-inch-thick boards. It is a modern high-production sawmill with lots of computers and lasers, but with a relatively large number of hands-on employees. The boards coming out of this mill were beautiful. It was interesting to learn that most of the lumber produced there was destined for the pressure-treated lumber market or out to the Midwest to be sold at Menards, a chain of home improvement stores.

At ODF’s Tillamook Forest Center, we learned about management of the Tillamook State Forest and how much of a problem Swiss needle cast is in the forest’s Douglas-fir plantations. This fungal needle disease is causing major losses in tree growth and even some mortality. Western hemlock does not get Swiss needle cast so foresters on the west side of the Coast Range are increasing the number of hemlock they are planting in forests with a mix of tree species. And in coastal forests, they are mostly planting hemlock.

This all reminded me of when I was a forestry student 40 years ago. Back then, we were taught that western hemlock was pretty much a weed and had little value in the market and may not have a place in industrial forestry. Boy, have things changed. Improved management, milling and marketing, along with a major disease problem have changed perceptions of western hemlock among foresters from a weed to a coastal super tree.

More 〉
〈 Back   1 .. 29 30 31 32 33 34 35 .. 66 Next   〉
Related Content
About OFRI
In 1991, the Oregon Legislature created OFRI to support and enhance Oregon's forest products industry.
People
OFRI partners with more than 100 organizations and individuals on our educational programs, publications and vid...
News & Social
Stay up to date with the latest OFRI happenings and news about forestry education in Oregon
Video Library
The Oregon Forest Resources Institute produces a wide variety of educational videos covering a range of topics.....