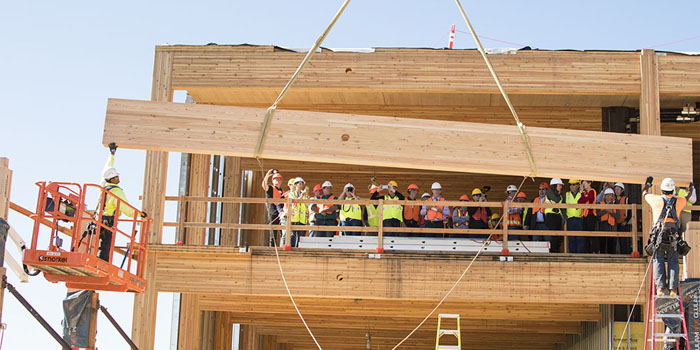 We visited The Future of Tall, a new exhibit at the World Forestry Center, and heard from architects, developers and contractors about the virtues of advanced wood products and mass timber construction. The group toured four mass timber buildings: First Tech Federal Credit Union’s new Oregon headquarters under construction in Hillsboro (you can watch a video documenting the project here); the Leland James building being refurbished in Portland’s Slabtown neighborhood by Cairn Pacific and Capstone Partners; the 38 Davis building that’s home to Ankrom Moisan Architects; and Carbon12, the nearly-complete condo project developed by the Kaiser Group.

The enthusiasm for the topic among our tour hosts was palpable. One developer who had other obligations the day of the tour, Cairn Pacific’s Noel Johnson, even made the effort to deliver insights via video.

Ben Kaiser, the Carbon12 developer, told the crowd that his building is decades ahead of the U.S. Green Building Council’s Leadership in Energy and Environmental Design (LEED) Platinum rating for sustainable construction. He explained that this is thanks to the carbon sequestration properties of Carbon12’s wood frame and the carbon emissions avoided by choosing wood over concrete and steel for the majority of its structural system. And by the way, it took Oregon timberlands just 6.1 minutes to grow the 24,411 cubic feet of wood used for the project.

LEVER Architecture’s Doug Sheets and Tom Cody of the development company project^ talked about how fire and seismic testing proved their Framework project, set to break ground later this year, is just as safe as any other high-rise structure. The project utilizes a unique post-tensioned wood rocking wall system designed to improve the building’s seismic resiliency and allow it to be re-occupied in short order after a major earthquake, unlike the vast majority of buildings.

The project architect for the new First Tech Federal Credit Union building, Scott Barton-Smith with the Portland architecture firm Hacker, spoke during the tour. He extolled wood’s renewability and carbon storage capabilities but added, “The best reason to use wood on a project like this is, it’s really beautiful. Every time I come out here, I feel like I really want to work in this building. It’s hard to imagine a single decision you would make about a material in a building that’s as impactful as using wood.”

Hearing developers, architects and contractors sing wood’s praises was gratifying. It was also, it seems, effective. One participant from the city of Portland’s Bureau of Planning and Sustainability told me, “Thanks a ton for the great tour the other day. For me, it was a real mind-changer.”

More 〉
Ready to talk about the future of Oregon’s forests? 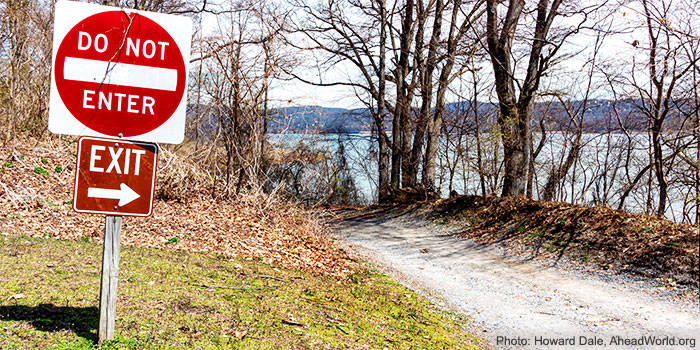 Is anyone experiencing cognitive dissonance about Oregon’s forests? In other words, are you having one or more conflicting thoughts about how we use, manage and protect our forests for all the values we hold dear? Here are a few thoughts to get you started:

Let me elaborate on these points, starting with mass timber. A new study published by Oregon Best estimates that mass timber manufacturing has the potential to create 2,000 to 6,100 direct jobs in Oregon, but “access to the raw material is uncertain and a heavily debated topic.” Generally, increased use of wood products would be a good thing, as they require less fossil fuel energy to manufacture – and, unlike other materials, wood stores carbon, removed from the atmosphere as CO2 during tree growth.

Data from the U.S. Forest Service’s Forest Inventory Analysis shows that the amount of forestland in Oregon has remained relatively constant since 1953. However, the FIA data also shows that on federal lands, only about 9 percent of the annual timber growth is harvested each year. The amount of timber that dies because of insects, disease or fire offsets annual growth by about 30 percent.

The outdoor recreation economy is gaining traction in Oregon and around the country. In Oregon alone, it generated $12.8 billion in consumer spending and supported 141,000 jobs in 2012. In response, the 2017 Oregon Legislature created a brand-new Office of Outdoor Recreation within the Oregon Parks and Recreation Department, set to begin Jan. 1.

Unfortunately, for those who love to hike, bike, camp, and fish or hunt, our treasured forest recreation destinations are being reshaped by massive fires and we’re getting choked by smoke.

According to a Sept. 23 Statesman Journal article, this summer’s Oregon wildfires burned an area the size of Rhode Island, but the real loss was to the “mountains and forests Oregonians traditionally pilgrimage to each summer and fall, including the Columbia River Gorge, Mount Jefferson and Three Sisters.” In an Oregonian article, Oregon State University College of Forestry Professor John Bailey says Oregonians should get used to wildfire and smoke. Bailey says, “The fuel mosaic we have out there is unprecedented ... We’ve created forest types we’ve never had. Those acres are connected to each other in ways they never were, and they are burning in ways they’ve never burned before.”

Cognitive dissonance is the tension that comes from holding two or more conflicting thoughts. Most Oregonians want timber for wood products, landscapes for recreation, and sustainable forests that provide clean air and water, but they also want less smoke and fewer fires – especially the catastrophic ones.

With a statewide population 80 times larger than what it was when Oregon became a state, we need to end the dissonance and figure things out. Perhaps it’s time to have a constructive conversation about what we want our forests and landscapes to look like in the future.

To paraphrase the old saying, if we are not able to learn from history – and especially our mistakes – then we are doomed to repeat them. We are Oregonians. We can do better. 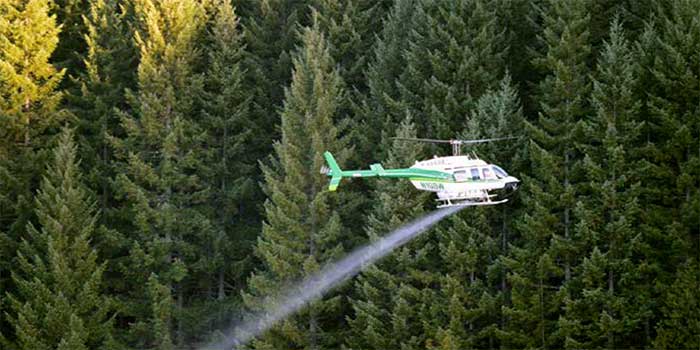 Public opinion polling in Oregon shows that many people are concerned about the use of herbicides in forestry and especially the aerial application of herbicides. However, when people learn about the rules that govern herbicide application on forests; the care with which herbicides are applied in order to protect water resources, wildlife, workers and neighbors; the expertise of the foresters and applicators; and the degree of application precision allowed with the latest technology, people are usually much more accepting of the practice.

Two current efforts that OFRI is involved in to educate forest landowners about herbicide application are the Pacific Northwest Forest Vegetation Management Conference and the Herbicides Best Practices for Oregon Forest Management webinars. OFRI has a bunch of co-sponsors for these programs, including Oregonians for Food & Shelter, Oregon Forest & Industries Council, Washington Friends of Farms and Forests, Washington Forest Protection Association and the Western Forestry and Conservation Association.

Here are a few more details about these two educational opportunities:

PNW Forest Vegetation Management Conference: This conference is modeled on the successful Forest Vegetation Management Conference held each winter in northern California. We hope to make the PNW Forest Vegetation Management Conference an annual event that meets the educational needs of foresters, landowners and applicators in Oregon and Washington. The theme of the inaugural 2017 conference is "Evolution of Science and Emerging Technology of Herbicide Application.” It is scheduled for Nov. 29–30 at the Holiday Inn in Wilsonville. In addition to presentations by academics, the agenda includes presentations and panel discussions by practicing foresters, applicators and chemical company representatives. There will also be vendor displays and plentiful networking opportunities. Pesticide recertification credits are being sought from Oregon, Washington, California and Idaho. OFRI is underwriting reduced registration fees for Oregon Small Woodlands Association and Oregon Tree Farm System members.

Herbicide Best Practices for Oregon Forest Management (recorded webinars): This webinar series was broadcast live in June 2016, and recordings are available to view for a one-time registration fee. The series consists of four two-hour sessions, each covering a different theme: why do we spray?, pre-operations planning, managing the day of the event and being a good neighbor. The sessions offer short presentations by various experts, but much of the time is devoted to discussions by foresters who manage herbicide projects. Registrants will gain access to a resource guide that includes a number of best practices checklists for assessing, planning and implementing spray projects. One-time registration and payment of $100 per viewer allows unlimited access to the videos.

More 〉
Who needs wood? We do! 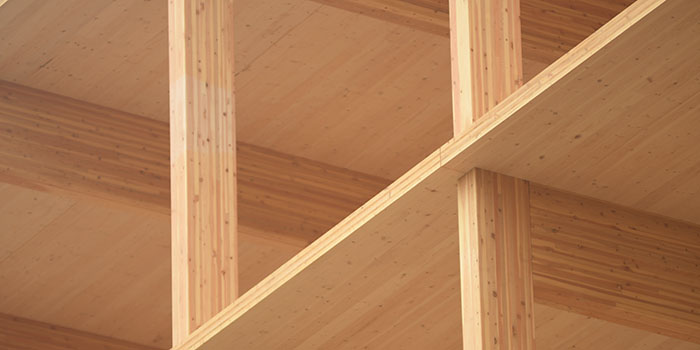 I’m generally not one to debate on social media – which is probably surprising to my friends and family who know I don’t normally shy away from debate – but a comment on OFRI’s Facebook page regarding my last blog gave me an idea that does have appeal as subject matter for this post.

It read, “Stop cutting down trees. We don’t need wood. Give us hemp.”

Hemp has its merits. It makes good fabric, excellent rope, and is edible and a good source of dietary fiber. It can be pressed into panels that have building applications, but it doesn’t have the same engineering properties as wood, steel or concrete, so it probably is not a solution as far as constructing large-scale buildings is concerned.

But what I really want to address is another part of the comment – the one that says, “We don’t need wood.”

I suppose we could have a philosophical debate about what people truly “need,” but that’s best left for places like this bar in Burlington, Vt., where they have notebooks full of patrons’ answers to the question, “What are your three needs?”

Instead, let’s just go with the assumption that people need places to live, work and play, and that humankind is going to continue to make buildings that fulfill that need. If we can agree on that, we can at least agree that we need building materials of some type, and we can begin to think about the attributes we want in the materials we’ll choose.

Just what are the attributes we want in a building material? First and foremost, it needs to be up to the job. It has to be strong and sturdy enough to keep the buildings from crumbling to the ground. And it has to meet some minimum standards for safety in seismic and fire events. It should be able to withstand the elements and be sufficiently durable that we’re not forced to replace buildings too often. There should also be enough of it to go around. Applying those criteria reduces the options to a handful of materials most of us are familiar with: concrete, steel, adobe, brick, wood, etc.

One (and only one) of those options comes from a renewable resource and also helps fight climate change by storing carbon. Half the dry weight of wood is carbon that was captured from the atmosphere in the form of carbon dioxide while the trees that provided that wood were growing. That carbon remains in the wood products for as long as they remain in those buildings (and even longer in the case of wood building materials that are recycled at the end of a building’s useful life). Once new trees are planted to replace those harvested, the carbon sequestration process begins anew – a cycle that can continue in perpetuity.

So, do we “need” wood? I’ll leave that question to the philosophers at the bar. But because I’m concerned about the sustainability of our planet and the condition of the world we leave for future generations, I’m sure glad we can choose to build with a material as remarkable as wood.

More 〉
〈 Back   1 .. 22 23 24 25 26 27 28 .. 66 Next   〉
Related Content
About OFRI
In 1991, the Oregon Legislature created OFRI to support and enhance Oregon's forest products industry.
People
OFRI partners with more than 100 organizations and individuals on our educational programs, publications and vid...
News & Social
Stay up to date with the latest OFRI happenings and news about forestry education in Oregon
Video Library
The Oregon Forest Resources Institute produces a wide variety of educational videos covering a range of topics.....