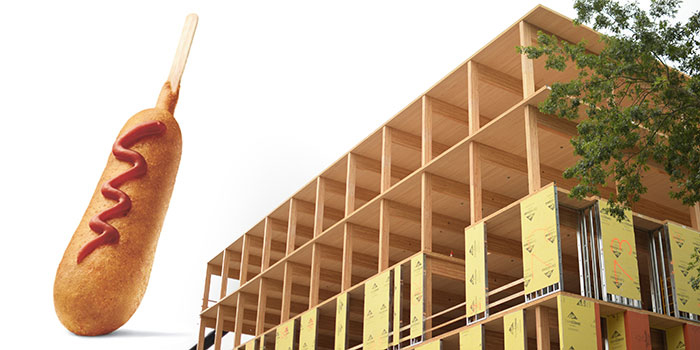 According to the International Code Council (ICC), an association dedicated to developing the building codes and safety standards used in design and construction across the U.S. and internationally, Building Safety Month is a public awareness campaign, celebrated by jurisdictions worldwide for the past 38 years, to help folks understand what it takes to create safe, sustainable structures.

This year’s celebration is particularly apt because it comes barely two weeks after the ICC approved – by substantial margins – 14 proposed amendments to the International Building Code related to tall wood buildings. I attended ICC hearings held in Columbus, Ohio, to consider the code amendments, and testified in favor of them on behalf of Oregon’s Wood Products Working Group. Convened by the office of Gov. Kate Brown, the group works to expand and support the state’s advanced wood products industry.

Combined, the proposed code amendments would allow three new types of mass timber construction, including tall wood buildings of up to 18 stories. Here in Oregon, the state’s Code Review Committee has since voted to adopt the code changes approved by the ICC in Columbus into Oregon’s state building code, word for word. Assuming that recommendation makes it through the Building Codes Structures Board, it will be easier to obtain a building permit to construct a tall wood building in Oregon starting in October 2019.

These actions taken by the pre-eminent construction-code bodies are ample evidence that tall wood buildings are safe. Skeptics, though, might feel the need to see for themselves the evidence considered by the code bodies, nearly all of which addresses fire safety. To help spread the word about the safety of tall wood buildings, the Mass Timber Code Coalition, consisting of building officials, architects, engineers and a wide range of organizations including OFRI, is providing complete information on the proposed changes to the International Building Code on buildtallbuildsafe.com, including fire test results.

But mass timber building safety doesn’t stop there. Last year the U.S. Department of Agriculture Forest Products Lab, in conjunction with WoodWorks and the Softwood Lumber Board, led a series of live blast tests  to demonstrate the capability of cross-laminated timber (CLT) structures to resist a bomb explosion. The results have led the U.S. Department of Defense to expand the use of wood for blast-resistant construction.

Right here in Oregon, the design team for Framework, a 12-story CLT building soon to break ground in Portland’s Pearl District, has devised and tested an innovative structural system for the building. It will not only have state-of-the-art seismic safety, but also require minimal repairs following an earthquake. Post-tensioned cables will allow the structure to rock back and forth during an earthquake and then re-center itself when the shaking is done. That means that, unlike the vast majority of buildings – which are designed only to allow for occupants to safely evacuate during an earthquake – Framework will not need to be demolished and rebuilt once the initial danger has passed.

So … your corn dog likely has a wooden stick, and it certainly deserves its day, but chances are it’s not nearly as safe for you as these new wood buildings. 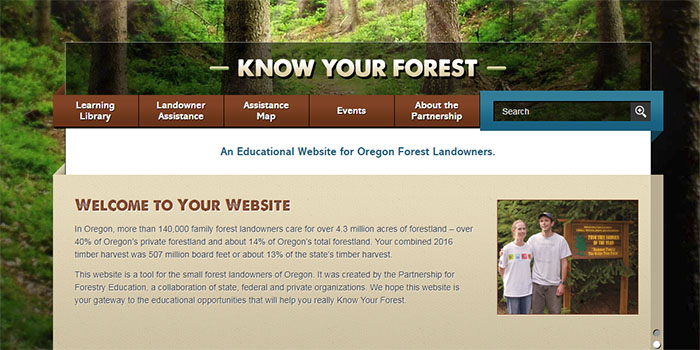 Spring is a time for rebirth and rejuvenation, so it is fitting that KnowYourForest.org, an educational website for Oregon forest landowners, has a new look and some new content.

KnowYourForest.org was created in 2012 by the Partnership for Forestry Education, a group of Oregon-based organizations that have come together to help educate the state’s forest landowners. Managed by OFRI, the site provides information from a variety of public agencies and nonprofits, including the Oregon State University Extension Service, Oregon Department of Forestry, Oregon Small Woodlands Association and Oregon Tree Farm System.

This is the first significant update of KnowYourForest.org since it was unveiled. It now includes new and updated content and some new features. Among the new content is a page in the “Learning Library” on forestry business and taxes, curated by Tammy Cushing, forest business and tax extension specialist with OSU Extension. This page includes a new video in which I interview Tammy about forest business issues.

Updated content includes a redesign of the “Forest Management Planning” page in the Learning Library, curated by Lauren Grand of OSU Extension and ODF’s Thomas Whittington. This page features an updated version of the Oregon management planning template and a link to the new “Oregon Forest Management Planning” website that is also curated by Lauren and Thomas.

The site also now features a series of new videos. In addition to Tammy’s forest business and tax video, we have two new videos on OSU Silviculture Extension Specialist Steve Fitzgerald’s wildfire page in the Learning Library. The “Making Your Forestland Fire-Safe” video features Alicia Jones of OSU Extension and Kyle Reed of the Douglas Forest Protection Association. The second video, “How to make your Home and Property Fire-Safe,” features Tom Fields of ODF and Kris Babbs of Keep Oregon Green.

We also have a series of new videos on the “Forest Protection Laws” page that were developed by ODF and feature Ryan Gordon from the agency’s Private Forests Program. These shorter videos cover the Oregon Forest Practices Act’s new Salmon, Steelhead and Bull Trout (SSBT) stream buffer requirements in short, easy-to-use segments.

Finally, the opening page of KnowYourForest.org features the new third edition of Oregon's Forest Protection Laws: An Illustrated Manual and the latest update to Family Forests, a resource guide for Oregon family forest landowners. These new publications can be downloaded from the site and hard copies are available to order.

So, before you head out to work on your spring tree farm chores, check out the updated KnowYourForest.org website. 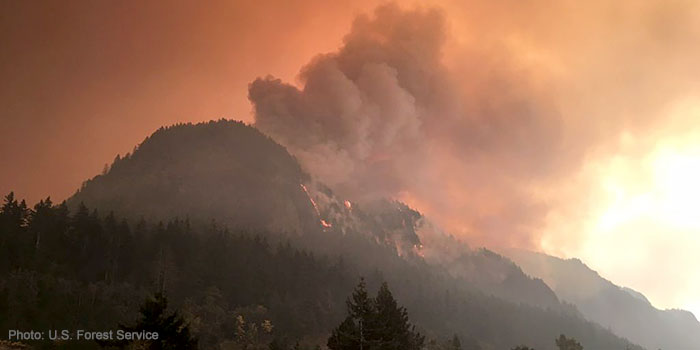 Earlier this year, OFRI published a report titled “Impacts of Oregon’s 2017 Wildfire Season.” In it, we documented the hidden costs of fire, including impacts to air quality and health, school athletics, travel and tourism, employment and the economy, transportation, and iconic Oregon economic sectors such as the state’s wine and timber industries.

By all counts, last year’s fire season was horrific. The state experienced hazardous levels of smoke, including 160 days considered “Unhealthy for Sensitive Groups.” As thick smoke blanketed the state, emergency room visits increased by 86 percent the first week of September. The Oregon Shakespeare Festival in Ashland canceled nine performances, a direct loss of $373,000. The community of Sisters scratched its annual folk festival, losing $1.2 million in local economic impact. Cycle Oregon canceled its annual ride. For three weeks, drivers were detoured off their usual route across Interstate 84. More than 7,000 people were evacuated in order to escape fires in central Oregon, the Columbia River Gorge and southwest Oregon.

In the four-page summary of the 24-page report, we asked, “Where do we go from here?” I’m happy to report that people are stepping up.

This spring, our federal lawmakers also took a positive step. After six months of continuing resolutions, Congress finally passed, and the President signed, the $1.3 trillion Omnibus Appropriations Act, a plan to fund federal agencies for the remainder of 2018.

Perhaps no part of the act is more important to Oregonians than a plan to improve the way the federal government pays for wildfire suppression, as well as some much-needed forest management reforms.

The effort to change how the federal government pays for fighting wildfires dates back to 2014. That’s when it became obvious that federal firefighting costs were robbing other parts of the U.S. Forest Service’s budget originally earmarked for funding forest management, including restoration, thinning and other measures that reduce wildfire risk. The old plan clearly had failed. Wildfires continued to grow in number, size and intensity. And for many Oregonians, the 2017 “Summer of Smoke” was the last straw.

Oregon’s forests will never be “fire-free.” Nor should they be. Wildfires are part of the forest ecosystem. They remove fuels that can create conflagrations that endanger watersheds, wildlife and communities. Fires thin out smaller trees, allowing more water, sunlight and nutrients to reach the remaining trees and shrubs. They also create forest clearings favored by pollinators such as bees, butterflies and hummingbirds.

We have to live with a certain amount of fire and smoke, but we also need to manage our national forests for forest health, fire resiliency and public safety, including creating safer conditions for wildland firefighters. Fortunately, the omnibus bill includes some common-sense reforms. These include allowing the repair and reconstruction of forest roads under a deal that allows state agencies to perform forest management activities on federal land; creating legally sufficient pathways for hazardous fuels and wildfire resiliency projects; amending what’s known as the Healthy Forest Restoration Act to allow creation of fuel breaks and firebreaks; and managing vegetation around power lines.

It’s taken more than 100 years to create the crisis in our public forests, so we can’t expect results overnight. But Congress’ action is an important first step of many more to get us on the path to healthier, more fire-resilient forests. 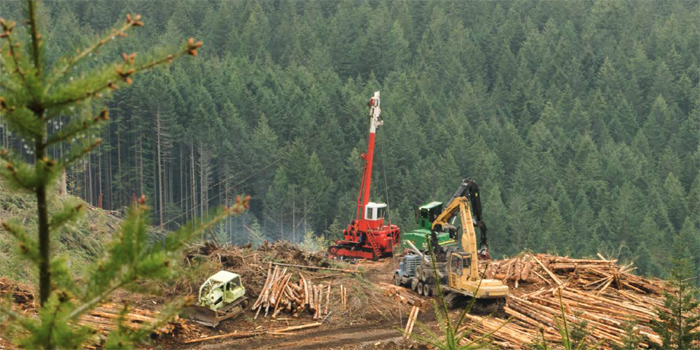 As I write this, I am just coming off three days of building tours, plenaries and breakout sessions at the third annual International Mass Timber Conference. I joined more than 1,200 others as mass timber construction enthusiasts from 21 countries gathered to share the latest information about a building technology that is slowly but surely changing skylines across the world.

I was most struck by the closing panel discussion led by North American Forest Partnership Executive Director Will Novy-Hildesey. Referring rather opaquely to the forest product industry’s tendency to ignore resource extraction issues when touting mass timber’s many benefits, panelist Nicole Miller, managing director of the environmental consulting firm Biomimicry 3.8, beseeched us to be more transparent.

And so I will be: Clearcuts happen.

Clearcuts happen because it’s a more economical way to harvest some types of timber, and clearcuts happen because certain tree species need openings with direct sunlight to reproduce. This is particularly true for Douglas-fir, Oregon’s most prominent and most valuable native species, used primarily in building construction.

Reforestation also happens, to the tune of some 40 million seedlings planted every year on harvested lands in Oregon.

Granted, when clearcuts happen and they are replanted with native tree species, as is the law in Oregon, what grows back is not the exact same ecosystem as what was removed. But it is a forested landscape that provides habitat, recreation opportunities and carbon sequestration benefits, among other values.

When strip mines and limestone quarries happen, those resources are not, and cannot be, replenished. When forests such as those that once occupied the island of Manhattan are clearcut and replaced by massive cities, no amount of biomimicry can replace what was lost.

Let’s face it: Human population continues to grow. We need to, and will continue to, construct buildings. We have choices in what materials we build with. Every choice we make has implications.

As was made abundantly clear during the three days I spent at the Mass Timber Conference, mass timber technology is often vastly superior to the dated building technologies it is replacing. Conference speakers praised its affordability, efficiency, and fire and seismic safety, and even noted how exposure to wood in buildings can improve our health. Many, including Ms. Miller, spoke passionately about how using wood in more of our largest buildings gives us a real chance to not only reduce carbon emissions but actually to combat climate change, thanks to its tremendous carbon storage potential.

One building material is derived in part from clearcutting, is 100 percent renewable and stores carbon. Given the options, I choose that one. We all should.

More 〉
〈 Back   1 .. 22 23 24 25 26 27 28 .. 66 Next   〉
Related Content
About OFRI
In 1991, the Oregon Legislature created OFRI to support and enhance Oregon's forest products industry.
People
OFRI partners with more than 100 organizations and individuals on our educational programs, publications and vid...
News & Social
Stay up to date with the latest OFRI happenings and news about forestry education in Oregon
Video Library
The Oregon Forest Resources Institute produces a wide variety of educational videos covering a range of topics.....