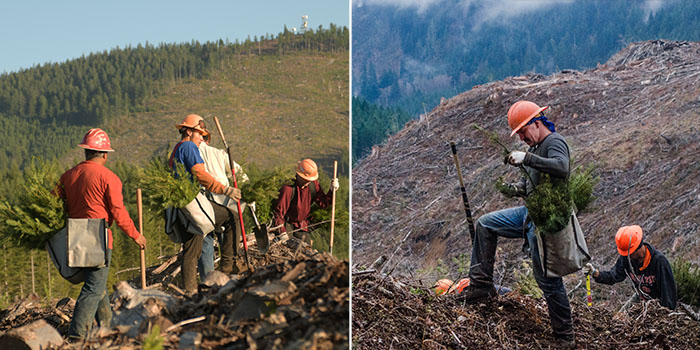 OFRI begins its 2020 educational advertising campaign this week with a handful of new television and video spots. Over the years, OFRI has made it a priority to educate Oregonians on the importance of reforestation after timber harvest. So we thought, “Let’s go film a real planting crew putting the next generation of trees in the ground.” And we did just that.

Our film crew met the planting team one beautiful morning in August up on the coast range to plant a few hundred seedlings. When you see the spots, the lighting is perfect. The weather is perfect. The crew is climbing a gentle hillside and we see them from multiple angles. It looks like a great day to plant trees.

Honestly, it wasn’t. It was the middle of August. It was hot and sunny. Anyone who has ever tried to establish new seedlings knows that most of those seedlings are goners. But we filmed in August because long days make it easier to organize a video shoot, and a real tree planting crew is just too busy during planting season to plant a single acre over and over for just the right camera angle.

In reality, tree planting in Oregon’s forests doesn’t take place during a beautiful August morning. It takes place in the dreary gloom of February to take advantage of seedling dormancy and the cool, wet weather conditions that promote good root development.

Previously, I had gone out with another planting crew during the early spring tree planting season in very different conditions. By different, I mean nasty. It was cold. It was rainy. They were planting on ground that was making them work for every foothold they could get. I went out to take photos and video of this crew in action.

It was hard work – and all I had to do was carry a camera and try to keep up. Yet, even though they each carried two weighty sacks full of trees as they climbed up slope after slope, the tree planters were moving fast and leaving me behind. I kept up as best I could and took photos and video when I could. Along the way, I stumbled a bunch, fell down a couple of times and had to take a breather more times that I’d like to admit.

The experience certainly gave me admiration for tree planting crews. At OFRI, we help Oregonians understand that 40 million trees are planted every year. They probably aren’t aware that all those trees are planted in the worst weather, over the toughest terrain and by hand – every single one of them.

Following a tree planting crew for a day was a cool trip, literally. And one that my knees and hips will remember for a very, very long time.