〈 Back To Articles
A healthy forest is no accident 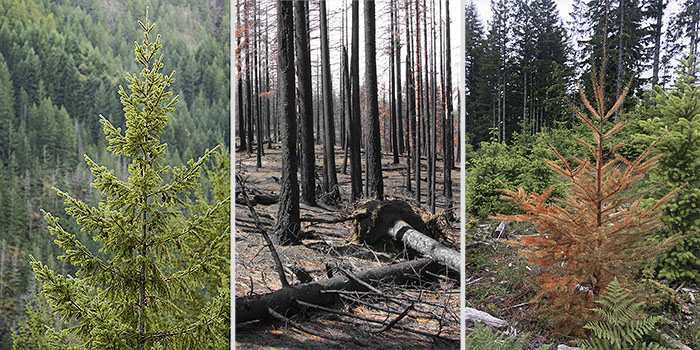 Forest health is a human construct and it can best be promoted by human actions. A forest is healthy or unhealthy because we define it as such. On its own, a forest has no concept of health.

This was the premise of my closing remarks at the end of the first day of Oregon State University’s “Forest Health in Oregon: State of the State 2020” conference, held Feb. 26-27 on the university’s campus in Corvallis. Here is a summary of what I said:

The drivers of forest health in my human construct are forest condition, forest disturbance, ecological reaction and human reaction. I will discuss each of the drivers in turn:

Federal forests encompass about 60% of Oregon’s forests, or nearly 18 million acres. The Nature Conservancy estimates that over 5.6 million acres of these forests have been identified as fire-adapted forests in need of restoration. These forests are generally overstocked and ready to burn. U.S. Forest Service Forest Inventory and Analysis data show that federal forests account for 1.5 billion cubic feet of growth per year. This is over 50% of the total forest growth in Oregon of 2.8 billion cubic feet. Of this federal forest growth, 8% is harvested, 36% is counted as mortality and 56% is net change or additional volume on these already overcrowded federal forests. These overcrowded forests are fire-prone and prone to infestations from insects such as bark beetles. These forests are also very sensitive to drought and climate change.

Forest disturbance can be human-caused, such as logging, thinning and prescribed burning, or natural, such as wind storms and lightning-caused wildfires. Human-caused disturbances–unless it’s an accidental human-caused wildfire–can often be designed to achieve certain outcomes such as fire fuels reduction, increased fire-resiliency and managed smoke. Natural disturbances are much less objective-oriented, often leading to stand replacement fires and unwanted smoke.

“Ecological reaction” is the functional response of the ecosystem parts and process to the disturbance. A good example is the Biscuit and Chetco Bar fires, which burned in southwest Oregon with similar footprints in 2002 and 2013. These lightning-caused fires burned in overstocked forests at the dry time of the year. They appeared to be catastrophic from a human perspective. However, from an ecological perspective, they were moderate- and mixed-severity fires that reset the successional cycle and started a new forest with a clean slate.

To most people, a healthy forest is one with mostly live trees and low risk of fire. Wildfire is seen as destructive. The media often uses the word “catastrophic” when talking of wildfire. Smoke intrusion into Oregon cities is a major health issue. Human-driven forest disturbance is also often seen in a negative light. Logging and burning are perceived as bad. However with education and collaboration, people can understand that human-caused disturbance can lead to a healthy forest and can achieve social objectives.

So, back to my premise:

Forest health is a human construct. Benefits from the forest, including clean water, clean air, wildlife habitat and forest products, may be produced to a greater degree in forests with fewer diseases, damaging insects, invasive species and wildfire. Human needs are better met in such a forest, and so we deem these “healthy forests.”

Forest management by humans can improve the health of the forest. Thinning, prescribed burning and invasive species control can all promote healthier forests. Human support for active forest management can be driven by its perception as promoting forest health.

Or, in the words of an old bumper sticker I have on my bulletin board, “A healthy forest is no accident.”

Now that you have read my closing remarks, you might be interested in some of the topics that were covered at the recent forest health conference. The conference presentations are available as downloadable PDFs here. A great summary of the topics covered during the conference was recently published by the Forest Service and the Oregon Department of Forestry (ODF). The publication is called Forest Health Highlights in Oregon – 2019. Download a copy here. More forest health resources are also available at the ODF forest health page.