〈 Back To Articles
40 million seedlings? Are they all Doug-fir? 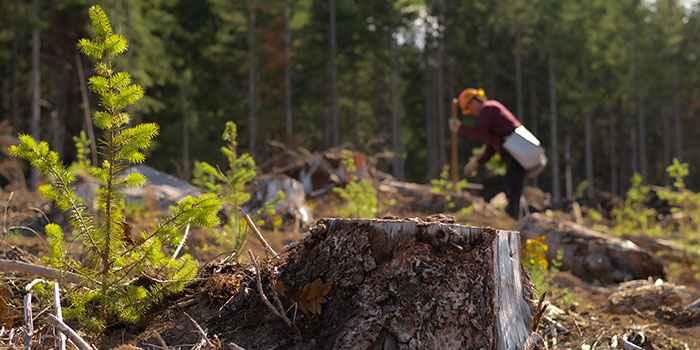 If you’ve been watching much TV or spending time on social media during your stay-at-home, social-distancing time, you may have had the pleasure of seeing one or more of OFRI’s educational ads. We’ve been focusing on reforestation after timber harvest, and frequently tout the fact that every year Oregon forest landowners plant 40 million seedlings. Many people believe this fact at face value, but some have questions.

The two most common questions are:

To answer the second question, not all of the 40 million trees planted in Oregon’s forests each year are Douglas-fir. Doug-fir is the most common tree planted in Oregon, however. That’s because as a native tree species it is well adapted to most of the sites where planting is done. Another reason is that most planting is done after logging on private lands. Oregon’s forest protection laws require private landowners to replant trees after harvesting timber. Most timber harvest involves logging Douglas-fir trees, which often end up at mills that use them to make lumber or plywood. A primary tenet of Oregon’s law requiring reforestation is to replant the same species that were removed in most cases, unless there’s a good reason not to.

Some situations where Douglas-fir is not the best species to plant are in areas that have diseases such as laminated root rot or Swiss needle cast. Both these diseases are common in western Oregon, and both either primarily or exclusively attack Douglas-fir. On the north Oregon coast, where Swiss needle cast is most common and can severely limit Douglas-fir growth, reforestation typically involves planting western hemlock, Sitka spruce and western redcedar. In the Coast Range and the Cascades, the most common root disease is laminated root rot. This disease kills all the Douglas-fir trees in pockets that are a quarter-acre or larger. Reforestation of laminated root rot pockets generally involves planting western redcedar, which is resistant to the disease, or red alder, which is immune.

Even where Douglas-fir is the preferred species to plant, many forest landowners enjoy having a mix of species in their forests and often mix in other conifers. A mixed-species stand of trees may be more resistant to diseases and insects, which usually favor one species over another. Forests with a mix of tree species may also attract a larger variety of wildlife. Western redcedar is commonly planted along streams and even in the understory of thinned Douglas-fir stands. Folks who are trying to develop multi-story stands usually plant shade-tolerant conifers such as western hemlock, grand fir and western redcedar beneath an overstory of Douglas-fir. That’s because Doug-fir is not shade-tolerant and doesn’t do well as an understory tree.

In addition to the sites in western Oregon where Douglas-fir is the predominant species, there’s also some timber harvest – and thus, tree planting – in southwestern Oregon. The forests in southwestern Oregon are fairly complex and often have a mix of four or five species of conifer, including ponderosa pine, Douglas-fir, incense cedar, western white pine, Jeffrey pine and white fir. These forests are generally planted with a mix of species after logging. In recent years, drought has led to poor survival of some species, and ponderosa pine and incense cedar have been favored over Douglas-fir and white fir.

East of the Cascades, many of the forests are primarily ponderosa pine, lodgepole pine or a mix of conifers. These forests are often selectively logged, and no tree planting is usually required. In fact, many of these forests have too many trees. Tree planting on Oregon’s east side is primarily done after wildfire if most of the trees in an area are killed. In those cases, a mix of species is planted that mirrors the mix present before the fire.

Finally, as every reforestation forester will tell you, just because you only plant one species doesn’t mean you’ll only have one species in your new forest. Shade-tolerant species such as grand fir, western hemlock and western redcedar commonly seed in naturally after logging, and become part of the next forest regardless of what species is planted. Hardwood trees and shrubs not only seed into freshly logged areas, but also sprout from the roots or stumps of parent plants. The forester’s next job after planting and getting trees to survive to be teenagers is often to thin the stand to reduce overcrowding. Thinning is a great opportunity to balance the species mix of a forest.