〈 Back To Articles
How many trees were burned in the 2020 Labor Day fires, and do we still have more trees than we did 100 years ago? 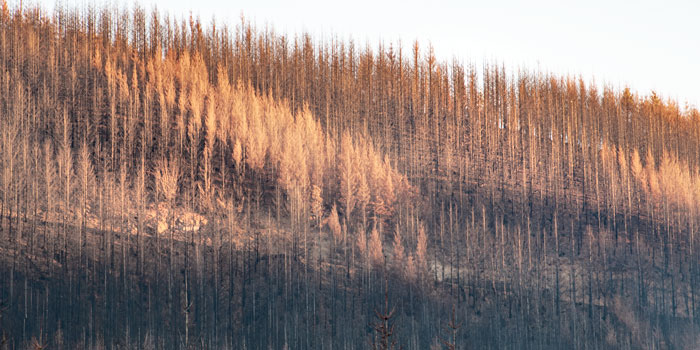 In light of 2020’s devastating fire season, I was recently asked these two questions. To answer them, I turned to data published by the U.S. Forest Service’s Forest Inventory and Analysis program, or FIA, and employed a bit of creative math.

Forest Resources of the United States estimates the total amount of forestland in various states over time. The closest estimate we have for total forest area in Oregon 100 years ago is 1920, when Forest Resources of the United States estimates we had approximately 30.3 million acres of forestland. Based on the report’s findings, we can see that in 2017 we had about 29.6 million acres of forestland, nearly 98% of the forestland area we had in 1920. Unfortunately, the only data we have for 1920 is an estimate of forest area. However, we do have excellent estimates of timber volume by state back to 1953, and estimates of net volume for regions by tree-diameter classes back to 1953. The forests of 1953 are not exactly the forests of 1920. However, the 1953 data says we had 30.3 million acres of forestland in Oregon – the same as the estimate for 1920.

Another helpful estimate from Forest Resources is the net volume of timber by tree-diameter classes and regions for 1953 through 2017. The relationship between diameter class and trees per acre allows us to estimate the number of trees in 1953 at 8.17 billion trees (I’ll spare you this math).

Now that I’ve done the math, I think it’s safe to say that we have upwards of 2 billion more trees in Oregon today than we did 67 years ago, even after losing nearly 350 million trees in the Labor Day fires. Some good news after such a rough fire season that had a devastating impact on our state’s forests and communities.