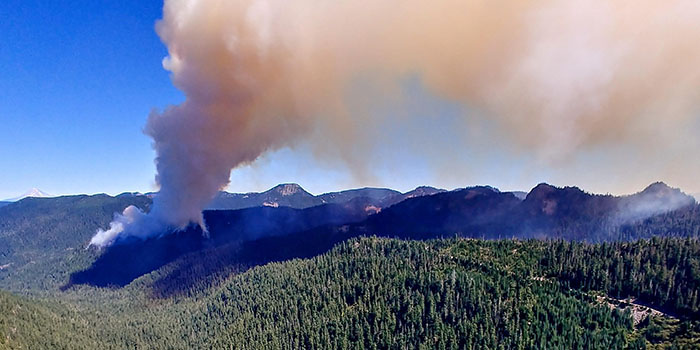 The Labor Day fires of 2020 have been devastating for western Oregon. Thousands were evacuated, hundreds lost their homes and, tragically, some even lost their lives. It will take a long time to recover from this series of disasters. However, there are some positive stories to tell.

This clearly was not a normal fire season. State and federal resources were all fully deployed, and no more firefighters or equipment were available anywhere by Sept. 9. Rather than wringing their hands, Oregon foresters, forest owners and contractors got to work. An early estimate is that a total of more than 600 forest industry personnel were involved in the early days of fighting these fires. A total of nearly 400 pieces of equipment, including bulldozers, excavators and tank trucks from forest landowners and operators were also involved. Add to this the dozens of farmers, loggers and small woodland owners who also helped attack the fires.

I have read many stories in the news and on social media about the work of private citizens in fighting these fires alongside the professional firefighters. I live in Mount Angel, and there are two stories that strike very close to home for me.

The first is how local loggers, builders and farmers saved many homes and buildings in the Scotts Mills area east of Mount Angel from burning as part of the Santiam Fire, which is now part of the Beachie Creek Fire. This included crews from K&E Excavating, who provided bulldozers and excavators. These heroes worked to fortify the lines built by fire crews, and also built new fire lines. In addition to sparing homes from the flames, their actions helped save the historic Holy Rosary church in Crooked Finger

Another is how employees and contractors of Weyerhaeuser working under the direction of the Beachie Fire incident management team built many miles of fire line to keep the Beachie Creek and Riverside fires from joining, in the Dickey Prairie area southeast of Molalla. This not only saved thousands of acres of private timberland, but avoided the firestorm that was predicted if these two huge fires merged.

As a professional forester in Oregon, I’ve been proud to share the story of Oregon’s complete and coordinated fire protection strategy for state and private forestlands in Oregon. However, it wasn’t until last month that I really understood what that means. Forest landowners in Oregon are required by law to provide protection from fire for their lands. Most private landowners have the Oregon Department of Forestry (ODF) or their local forest protective associations handle fire protection on their forest lands

According to ODF, private landowners pay about half the cost of the base fire protection through a local forest patrol assessment, which is matched by a General Fund allocation to ODF. Landowners also pay 60% of the costs for additional aircraft, heavy equipment and firefighters during extreme fire conditions such as we had in early September. Landowners pay half the cost of the state’s catastrophic insurance policy (through Lloyd’s of London). Landowners also pay half of the first $20 million in costs to fight large fires.

These private landowners obviously have skin in the game. They scrupulously follow all fire restrictions and closures, have all the required firefighting equipment and vehicles, and aggressively put out any fire starts they see on their lands. Oregon forest landowners are proud of our system and the ODF districts and associations that fight the fires.

Oregon had nearly 1 million acres burning on just these 13 fires, likely making this the largest annual burned acreage in Oregon since records have been kept. Nearly 400,000 acres, or about 40% of the burned land, was owned by private forest landowners. A blog by Mason, Bruce & Girard details ownership of the western Oregon Labor Day fires as of Sept. 15, and includes the following table, which shows ownership of fire areas by county: 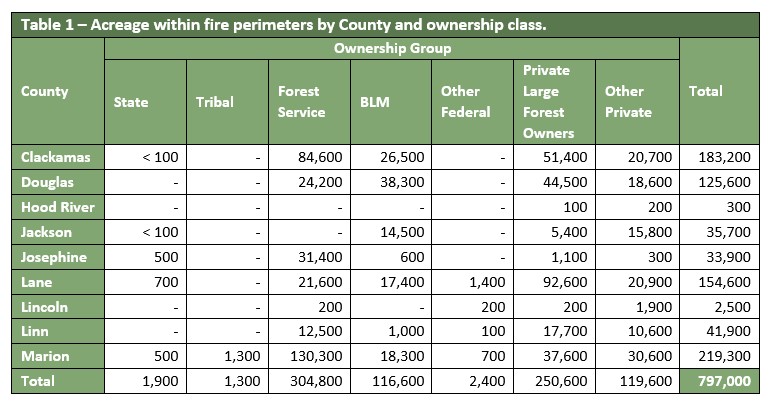 The acreage of private forestland within the perimeters of these fires represents the amount of private forestland and timber volume that’s normally harvested in two to three years. This happened in a week. There is going to be a massive post-fire timber harvest on private forestlands the next two years as landowners attempt to recover the value lost in the burns before the wood deteriorates. There also is likely to be a severe shortage of tree seedlings, as landowners reforest acres that were not in their plans. An average year in Oregon sees the planting of about 40 million seedlings. We may need to plant ten times that in the next few years.

It will take a long time to recover from these fires, and as a state we’re still taking stock of the social, ecological and economic impacts. I do want to take a moment to thank  firefighters for all you do for us, but also thank you to forest landowners, loggers and equipment operators for putting your bodies and equipment on the line to protect our forests and towns. This is both a very sad and a very proud time in Oregon forestry.