〈 Back To Articles
Thirty-two years of telling the forestry story 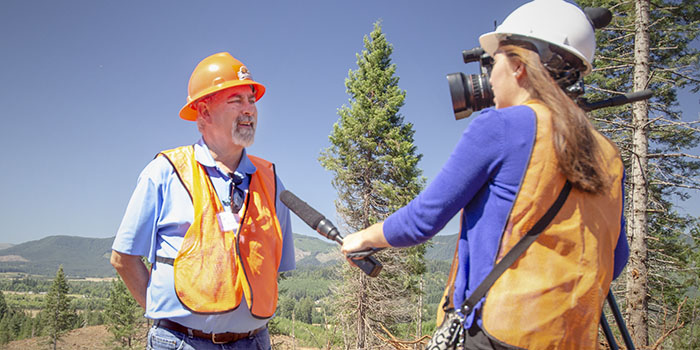 I’ve always been a storyteller, but for the past 32 years I’ve made a career of it. First I worked for 16 years for the Oregon State University Extension Service, and now for the last 16 as director of forestry for the Oregon Forest Resources Institute (OFRI). Throughout my career I’ve had successes and failures, and I’ve learned a few things.

My storytelling takes many forms. Sometimes I call it teaching; sometimes writing; sometimes giving a presentation to a service group; sometimes making a video; sometimes moderating a panel; sometimes visiting with friends over a glass of wine.

Below are my top 10 tips for telling the forestry story. A longer version of this article was published in the October issue of the Society of American Foresters’ Forestry Source newsletter.

1. Know the facts – A favorite storyteller from my college years was Emily Latella, played by Gilda Radner on “Saturday Night Live.” Emily would go on and on about some misunderstanding she had with the facts. Then when “Weekend Update” newscaster Chevy Chase would point out what the real facts were, Emily would say “Oh… never mind!” Being the one to say “never mind” is not good. I’ve found myself in this situation once or twice, and it has taken a lot of work to overcome it.

2. Know your audience – Interests, background, education and knowledge levels are different for each audience, and even from individual to individual. For instance, policymakers are known to be smart people, but their policy knowledge is generally about like the Platte River: a mile wide and an inch deep. It’s very likely your audience is not as expert as you are. Never over-assume what they know.

3. Develop messages that resonate with the audience – Telling a story to high school students is very different than telling it to policymakers, professional foresters or the adult public. Telling the public that a certain forest management practice such as clearcutting is economically efficient is a waste of time and might even be counterproductive. Telling the same audience that clearcutting can help create habitat for species such as songbirds and pollinators is much more effective. Crafting the correct message for the people you’re talking to requires knowing the audience.

4. Find a hook – A hook is a story starter that gets people’s attention and encourages them to read, listen or watch. One of my favorite hooks is in the old Euell Gibbons Grape Nuts commercial, where he starts out asking his audience if they’ve ever eaten a pine tree. He then states that “many parts are edible,” and makes a comparison to Grape Nuts, which apparently also has many edible parts. I must advise you to be very careful with using humor as a hook. I’ve found out over the years that it can be very easy to offend people, and offended people rarely listen to the rest of your story.

5. Follow the KISSING principle – I learned the KISSING principle early on. This acronym stands for Keep It Simple, Stupid; I’m No Genius. Although most people do think they’re “smarter than the average bear,” many actually are not. As experts, foresters often try to tell people everything we know about a subject because we think they’ll be impressed with our knowledge and therefore believe what we tell them. I’ve learned that it doesn’t actually work that way. Instead of attracting listeners with my level of knowledge, I lose them in the details.

6. Tell the story in a journalistic style – Put the most important point you want to get across first, and then add the details. In newswriting, this is known as the “inverted pyramid” format. Don’t build a deductive case. Foresters are generally trained in the scientific method, and we like to communicate in this way. Don’t do it; use the journalistic style for your story. Most people read only headlines of articles as they scan a paper, journal or newsletter. Some read the first paragraph, fewer read half the story, and almost no one reads to the end. If you don’t have your main point in the first or second sentence, most people will never read it. By the way, if you’ve made it this far in my blog, you probably are “smarter than the average bear.” (I sure hope that was funny.)

7. Recognize the emotional response of the audience – People would generally rather hear good news than bad news. Messages that affirm the good in people are readily acceptable by most folks. This point ties back to understanding the audience. People value wildlife, water quality, beauty and recreation from their forests. The good news is that foresters also value wildlife, water quality, beauty and recreation. Explaining forest management in terms of these elements will likely get a positive response from your audience.

8. Use the right messenger – Public polling research by OFRI and others has identified that not all messengers are equally trusted and listened to by the public or policymakers. People today have an inherent distrust of corporations, the federal government and environmental groups. They have a much stronger trust for university professors, state government employees, family forest landowners and professional foresters. I believe part of the reason for the trust is based on the relative position on the education versus advocacy continuum. At OSU Extension we always said that when advocacy starts, education stops.

9. Measure the audience’s reaction – One of the advantages of being a professional storyteller is you have the resources to see how effective your stories are. When we run an educational advertisement, we follow up with surveys to see if people recall our ads, if they understand the point we were making, and how our ads may have changed what they believe about important issues. This helps influence the messaging we use in future campaigns.

10. Repeat, repeat, repeat – Someone once told me that the word repeat has made the shampoo industry millions of dollars. This is also the million-dollar word when it comes to storytelling. Every time I hear or tell a story, I get a different level of meaning out of it. People forget. They also love to hear stories they know.

I hope you find these tips helpful – and thanks for telling our forestry story.