〈 Back To Articles
Prescribed burning 101 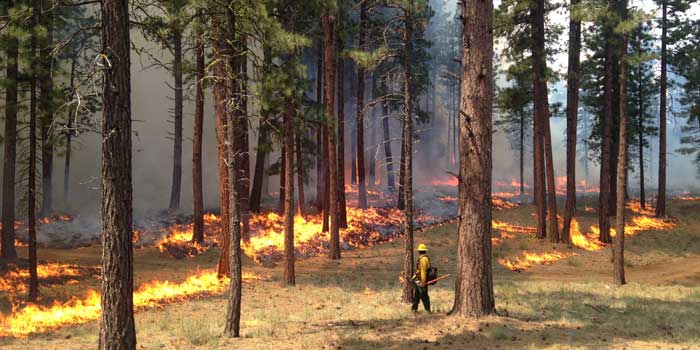 When I first heard the term “prescribed burning,” I pictured a doctor’s prescription pad written with instructions on how, when and under what conditions to direct the intentional start of a fire.

I would guess my first impression of prescribed burning isn’t all that different than most Oregonians. Starting a small controlled fire to help prevent a larger fire doesn’t seem very intuitive. In reality, using fire to fight fire is a practice that has been in use for hundreds of years. Native Americans successfully used fire to clear away brush and debris and rejuvenate the forest.

The main goals of prescribed burning are:

·         Creating firebreaks that help prevent wildfires from growing out of control

One type of prescribed burning used in Oregon is broadcast burning. A fire is ignited to burn along the ground in areas with a more open forest canopy. This type of prescribed fire is typical in eastern Oregon. In western Oregon, you’re more likely to encounter pile burning. Pile burning is burning slash piles of woody debris that are produced after logging. These piles are set aside after a timber harvest and are burned when wind and weather conditions permit.

It isn’t a good idea to start a prescribed forest burn whenever you want, and burns are regulated by the Oregon Department of Forestry to minimize smoke intrusion into populated areas. The conditions that need to be lined up for a prescribed burn to be as safe and controlled as possible include weather, wind and location. You’re not likely to see a prescribed burn taking place during the summer months in Oregon; this is when wildfire risk is high and a prescribed burn could easily get out of control. Likewise, if the winds are kicking up a prescribed burn doesn’t make sense, because the wind can send the fire in unintended directions.

While they might not require a doctor’s approval, prescribed burns are a useful tool in a forest manager’s toolbox to not only reduce the risk of wildfire, but also improve overall forest health.