〈 Back To Articles
All forest habitats are important 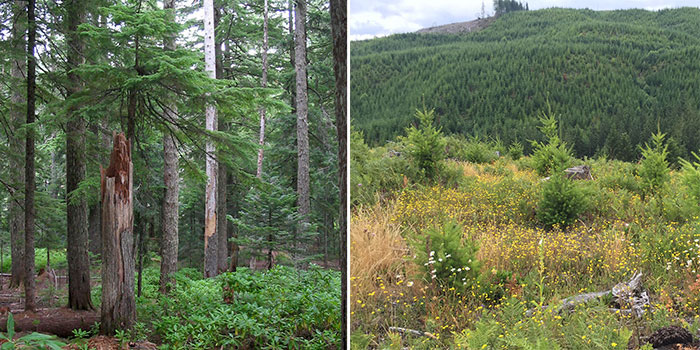 Forest managers in Oregon rely on research from many sources, including Oregon State University and the Pacific Northwest Research Station, to guide current management practices. Research findings inform their decisions on the best ways to manage forests to promote healthy wildlife populations as well as protect water supplies and other natural resources.

As a wildlife biologist who works closely with Oregon forest managers to help them manage forests for wildlife, the recent article authored by Phalan et al., “Impacts of the Northwest Forest Plan on forest composition and bird populations” caught my interest. It focuses on the Northwest Forest Plan (NWFP), which dictates the management of federal forests in the region, 25 years after it first went into effect. The scholarly review indicates that species like the northern spotted owl, which the NWFP was written to help, are still in decline. The article goes on to suggest that this is due in part to a lack of older forests with big trees, also known as late-structure or late-seral forest habitat, on federal lands due to timber harvest and wildfire. It is well established that northern spotted owl populations continue to decline. However, this decline is due in larger part to competition from the non-native barred owl, and less so from a lack of habitat.

It’s my understanding that the NWFP has actually led to an increase in late-seral habitat types. According to Forest Inventory and Analysis (FIA) data the U.S. Forest Service collects annually, from 2012 to 2016 an average of 92,173 acres of Oregon forests entered the 50-plus age class each year, while an average of 28,011 acres in that age class were harvested, yielding a net recruitment of over 64,000 acres annually. This data is specifically for areas managed under the NWFP and within 50 miles of the coast. This data clearly shows that we are working toward the goals of the plan.

Growing bigger, older trees obviously takes time, and we’re only 25 years into a 100-year plan. The FIA data suggests that we’re working toward an abundance of late-seral habitat. That is, unless it burns up. The Phalan et al. article points to wildfire as a reason for loss of late-seral forest structure. I agree. Our federal forests need to be managed against wildlife risk. Wildlife-friendly fuels-reduction projects will reduce the risk of wildfire and support wildlife habitat.

The Phalan et al. article also discusses how songbird species are in decline across all forest ownership types, including public lands managed under the NWFP and privately managed forests. Unlike the northern spotted owl, a lot of songbirds depend on younger forests dominated by tree seedlings and shrubs, also known as early-seral habitat. The importance of this type of habitat to songbirds has been a focus of recent research out of Oregon State University’s College of Forestry. In fact, the Oregon Forest Resources Institute dedicated an entire publication to this study. Just like late-seral forest habitat, early-seral habitat is a crucial habitat type and needs to be encouraged across all forest ownerships. I’m excited by the studies out of OSU that show biodiversity is being maintained in early-seral habitats through forest management.

One of the fundamental purposes of forest management is to provide habitat for wildlife across the landscape. Because there is such a diversity of species that call Oregon home, it follows that we need a broad range of habitat types, from young forests to old growth and everything in between. That means land managers must focus their management to provide all age classes of forest. Conserving only older forests has the dual effect of losing young forest habitat as the trees grow older and losing older forest habitat to fire. We must do better.