〈 Back To Articles
A big win for tall wood 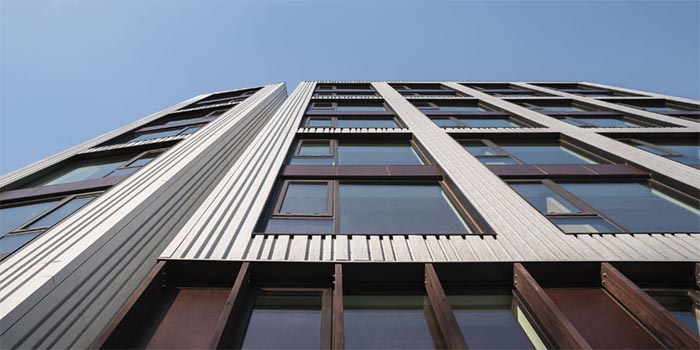 I had a whole other topic I was going to use for this month’s blog, but then came news that the International Code Council (ICC), which develops building codes used throughout the U.S., had released the preliminary results of the vote on tall wood code changes to the 2021 International Building Code –  and the result was a huge win for mass timber and tall wood buildings. Actually it was 14 wins, as all 14 proposed changes were approved by the ICC governmental voting members. Once certified by the ICC’s voting committee and board, the provisions clear the way for three new construction types involving mass timber to be included in the 2021 International Building Code. Those three building types set building safety standards and protocols for wood buildings up to nine, 12 and 18 stories.

“Approval of the tall mass timber changes is truly historic. For the past 100-plus years, model codes have consistently recognized traditional types of construction, and for the most part, they have remained unchanged until now,” says American Wood Council Vice President Ken Bland, a key player in the effort to develop the proposals and educate ICC voters.

The news, of course, is a big win for the mass timber industry. It’s also a big win for Oregon, particularly for rural economic development efforts. Oregon is home to two of the three mass-timber-panel-producing facilities in the U.S. that hold the certification needed for making mass timber panels that can be used to construct buildings and for other structural applications. Cross-laminated timber producer D.R. Johnson Wood Innovations, based in Riddle, and mass plywood panel producer Freres Lumber, in Lyons, are well-positioned suppliers for what is sure to be an uptick in demand for mass timber building materials.

The ICC vote is also a win for the building and design community across the country because it provides architects and contractors one more prescriptively allowed option that aligns with building codes when they’re considering which materials to use for designing and building commercial structures.

In addition, it’s a win for our forests because the mass timber industry has vast potential as a badly needed outlet for the type of timber harvested during forest restoration activities throughout the inland West. Finding a place for that wood fiber is critical as we seek ways to cover the costs of bringing overstocked forests back to a more fire-resilient, healthy state.

Perhaps most important, it’s a win for the environment. Because trees sequester atmospheric carbon and wood products store that carbon, wood buildings are a significant tool in the fight against climate change. These code changes provide an easier path for tall wood buildings to be permitted and built, and therefore a lot more carbon can be sequestered and stored in these structures. When that happens, we all win.

Attention now turns toward encouraging states and other jurisdictions to adopt these code changes as quickly as possible. Even though the changes are part of the 2021 International Building Code, there is nothing that restricts jurisdictions from adopting them prior to then. In fact, Oregon is leading the way in that regard, having voted this past summer to adopt the changes into the state’s 2019 structural code and establishing a statewide alternate method for applying the changes. This became effective in August. Washington is right there with us, having voted Nov. 30 to adopt the code changes into its building code. And California is not far behind.  Gov. Jerry Brown issued an executive order calling for the state’s building code agencies to review the new code changes and consider proposing their adoption in the next code cycle, which would be California’s 2019 building code.

We now have even more reasons to pop the corks. May you all have a happy and healthy holiday season.