〈 Back To Articles
Hello from China 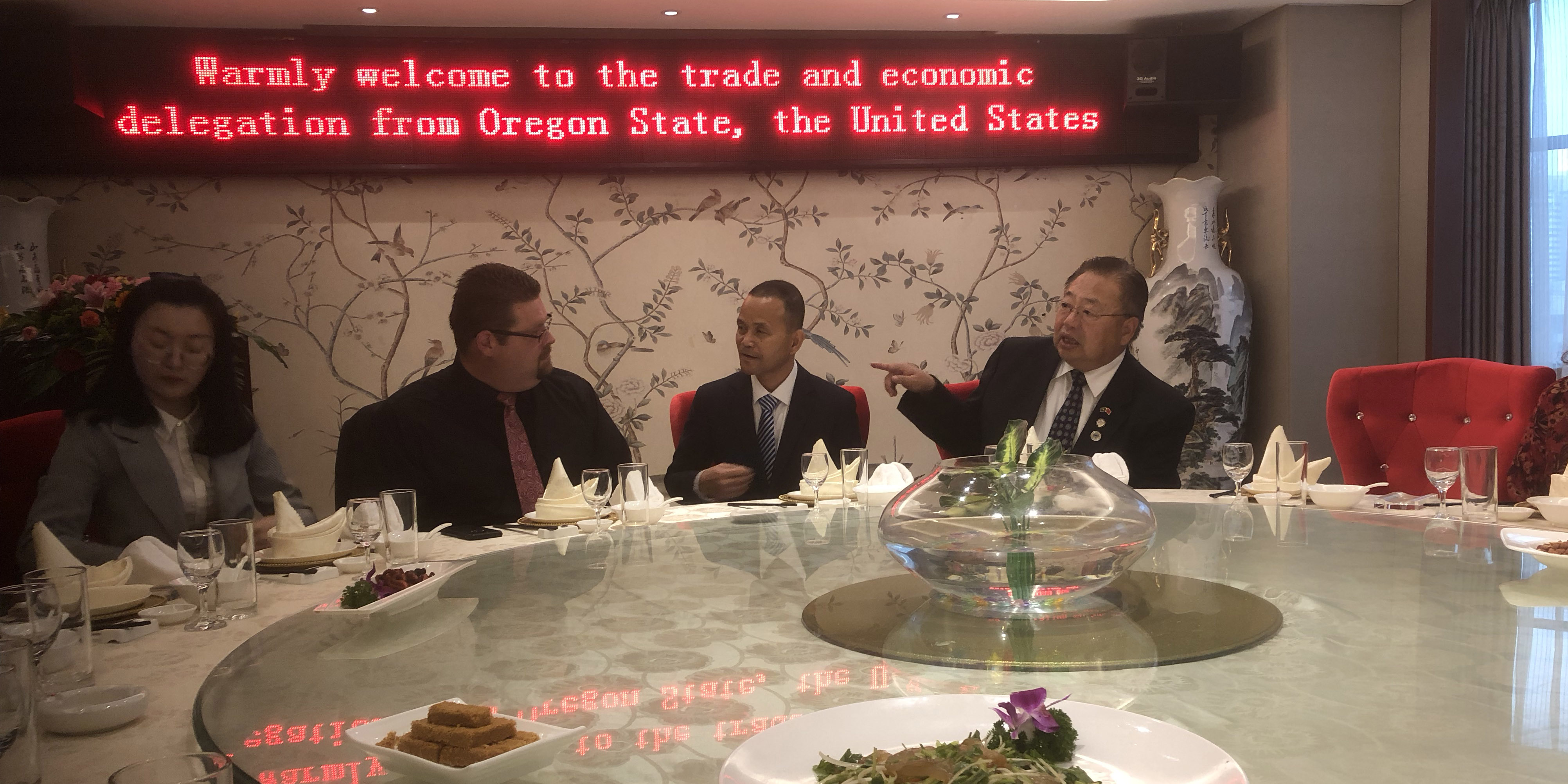 Earlier this month I had the distinct pleasure of representing OFRI on a trade mission to China led by the Oregon-China Sister State Relations Council (OCSSRC). The entire mission lasted three weeks, and I was able to join for about a week from Nov. 4-10.

The target of the trade mission was Oregon’s Chinese sister province of Fujian. Fujian is in southeast China on the country’s Pacific Coast. Like Oregon, it has prominent mountain ranges (including the Wuyi Mountains), is dissected by a major river (the Min), is mostly forested and has strong agriculture, including dairy, rice and tea, and manufacturing sectors. A great fit as our sister state.

The timing of the trade mission coincided with the China International Import Expo in Shanghai. At the expo there was an Oregon booth and a Softwood Export Council (SEC) booth. OFRI’s participation in the trade mission was covered by our membership in the SEC. I was not able to attend the expo due to my late arrival in China, but a million other people did. The expo is a huge symbol of the opening up of the Chinese economy to the world, and of the thirst their burgeoning middle class has for imported goods.

The trade mission was led by Oregon State Rep. David Brock Smith from Port Orford, a strong supporter of active forest management to achieve healthy forests and a robust forest sector economy (he specifically requested OFRI’s participation in the mission), as well as Clackamas County Commissioner Ken Humberston, who is very interested in mass timber building and production. Other delegates included Dr. Jim Johnson of the OSU College of Forestry, a delegate from the Port of Portland, delegates representing Oregon tourism, and three delegates from the OCSSRC.

On my first full day in China, our group took a bullet train from Shanghai to Wuyishan city in the Nanping municipality of Fujian province, to attend the 9th China (Fujian) - U.S. (Oregon) Seminar on Green Development, Tourism, Investment and Culture. The seminar opened with a welcoming banquet. The food was incredible, and the atmosphere was warm and friendly. My five words of Mandarin, along with smiles and gestures, got me through simple introductions, but having some great translators really helped with communication. 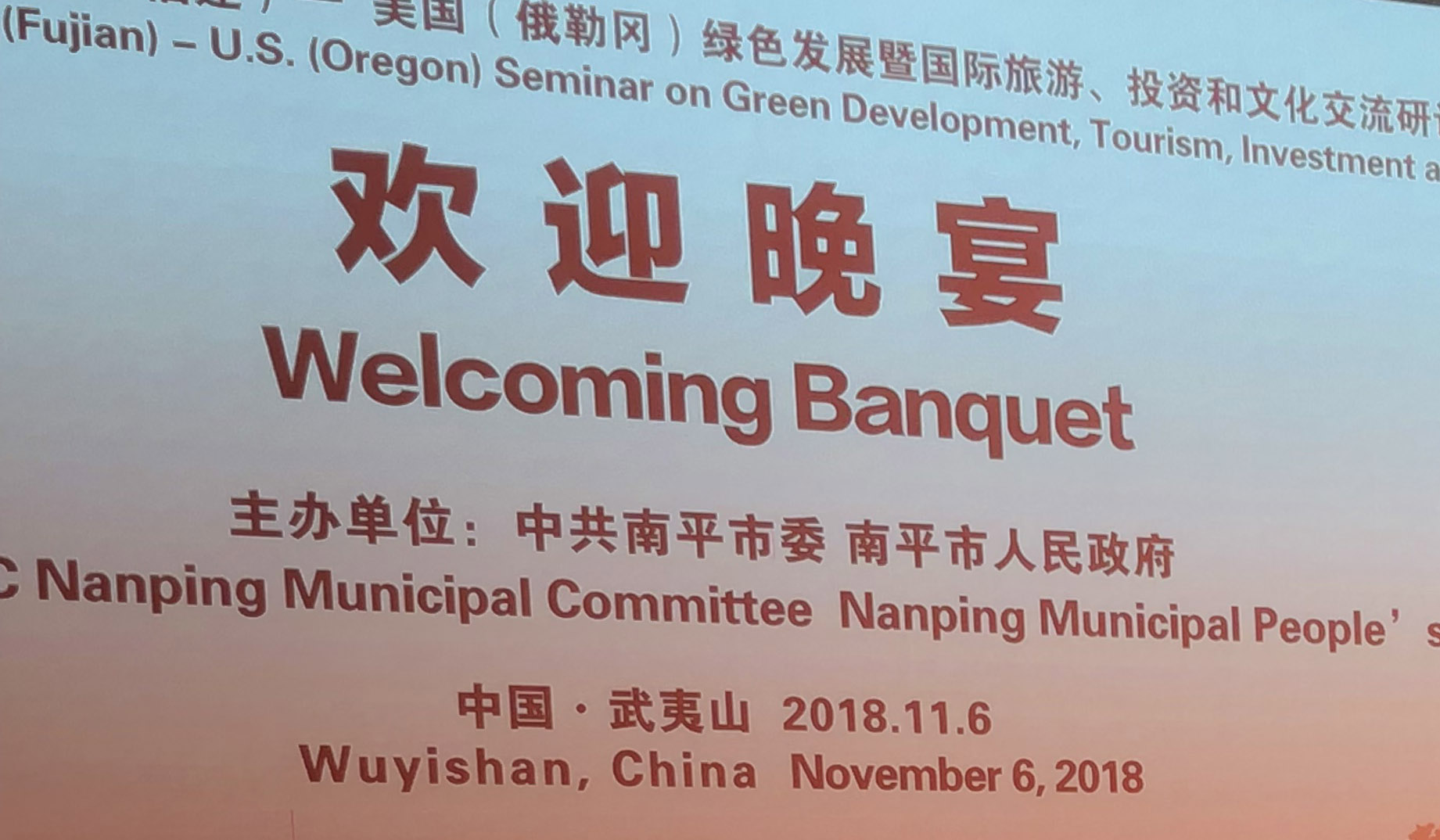 The Chinese treat their guests very well in general, but we were treated like royalty. There were several courses to the banquets, lots of toasts, and handing out business cards with two hands while smiling and bowing. I had my business card translated into Mandarin on one side as suggested by our OCSSRC leaders, and this really impressed our hosts, who generally have English on the reverse of their cards. It impressed them almost as much as my dexterity eating with chopsticks. They gave me an A for effort, but the servers usually brought me a fork and knife. Gift-giving is also part of Chinese culture at these events; I received several gifts of world-famous Wuyi black and jasmine tea. I gave away OFRI books and videos. All were happily received.

The main meeting of the seminar was put together by the Foreign and Overseas Chinese Affairs Office of Nanping Municipal People’s Government. In addition to a general session with speeches by our Oregon delegation leaders and their Fujian counterparts, there were concurrent sessions on green development and tourism. A Mandarin-language version of OFRI’s Forest to Frame video was shown in the general session, and all in attendance were well impressed. Jim Johnson and I both gave presentations during the green development session. My presentation was titled “Oregon’s Sustainable Forests” and included discussion of timber types and ownership, timber harvest by owner group, forest protection laws and mass timber. The Chinese Foreign Affairs Office had my PowerPoint translated into Mandarin along with my English words. It was really cool to hear the translator repeat my words in Mandarin. One of the high points for me was Jim Johnson and I being interviewed by Nanping City TV after the conclusion of the seminar.

The leaders of Fujian province are interested in building with mass timber – or at least interested in talking about it. They are very focused on green development and see using wood in construction as part of that. And, from what I observed, there’s certainly a lot of construction going on in the region. We saw an incredible number of apartment buildings going up. Some were more than 50 stories tall, while many are 20-plus stories. We literally saw hundreds of construction cranes in five days. But all the new buildings I saw appeared to be built out of concrete, brick and steel. If just 1 percent of these were built of mass timber, it could take a lot of wood.

After a visit to Wuyishan Mountain Park, the sister park of Crater Lake National Park, and a ride down the Min River on bamboo rafts, we headed by bullet train to Fuzhou, the capital city of Fujian province. In Fuzhou, we had a seminar and news conference with Fujian Provincial United Chamber of Commerce, where we learned about the province from the business leaders. The high point of this day was the signing of a memorandum of understanding between the governments of Oregon and Fujian.

Forestry is an interesting enterprise in Fujian province. The landscape of Fujian is steep and dissected, and mostly covered with trees. It reminds me of the Oregon Coast Range. Most of the native forest in Fujian province and much of China has been logged over the last millennia or so, with reforestation being a concept that only got going about 30 years ago. Most of the forests are therefore young. They are mostly owned by the government. Logging is generally prohibited, and forest management consists mainly of tree planting. Major tree species that have been planted include sugi (Cryptomeria japonica),which resembles Pacific yew in leaf shape but Douglas-fir in growth and tree form, dawn redwood (Metasequoia sp.), an ancient deciduous relative of California redwood that has golden leaves at this time of year, and Chinese red pine (Pinus massonia), which is reminiscent of ponderosa pine. All three of these species have tremendous potential as timber trees.

When we visited the Fuzhou Mountain resort high above the city of Fuzhou, we saw some very ancient planted Cryptomeria cuppressus trees, a relative of the sugi tree that looks more like an evergreen dawn redwood, that were estimated to be about 1,500 years old. There is a temple where tourists leave tokens of honor to the ancient trees. I left an American and a Chinese coin in recognition of the potential of these two great nations working together. This temple and others I saw on the trip were generally timber-framed in a post-and-beam style that made me think of the modern mass timber buildings that are being built in Portland and elsewhere.

At the top of the mountain, it was almost like a cloud forest. As we started down the mountain at sunset, we had a birds-eye view of Fuzhou with the lights coming on, and could really see the size of this great city. I felt that future building in these huge and growing modern Chinese cities, using mass timber grown in sustainable forests, might be a huge improvement for our planet. 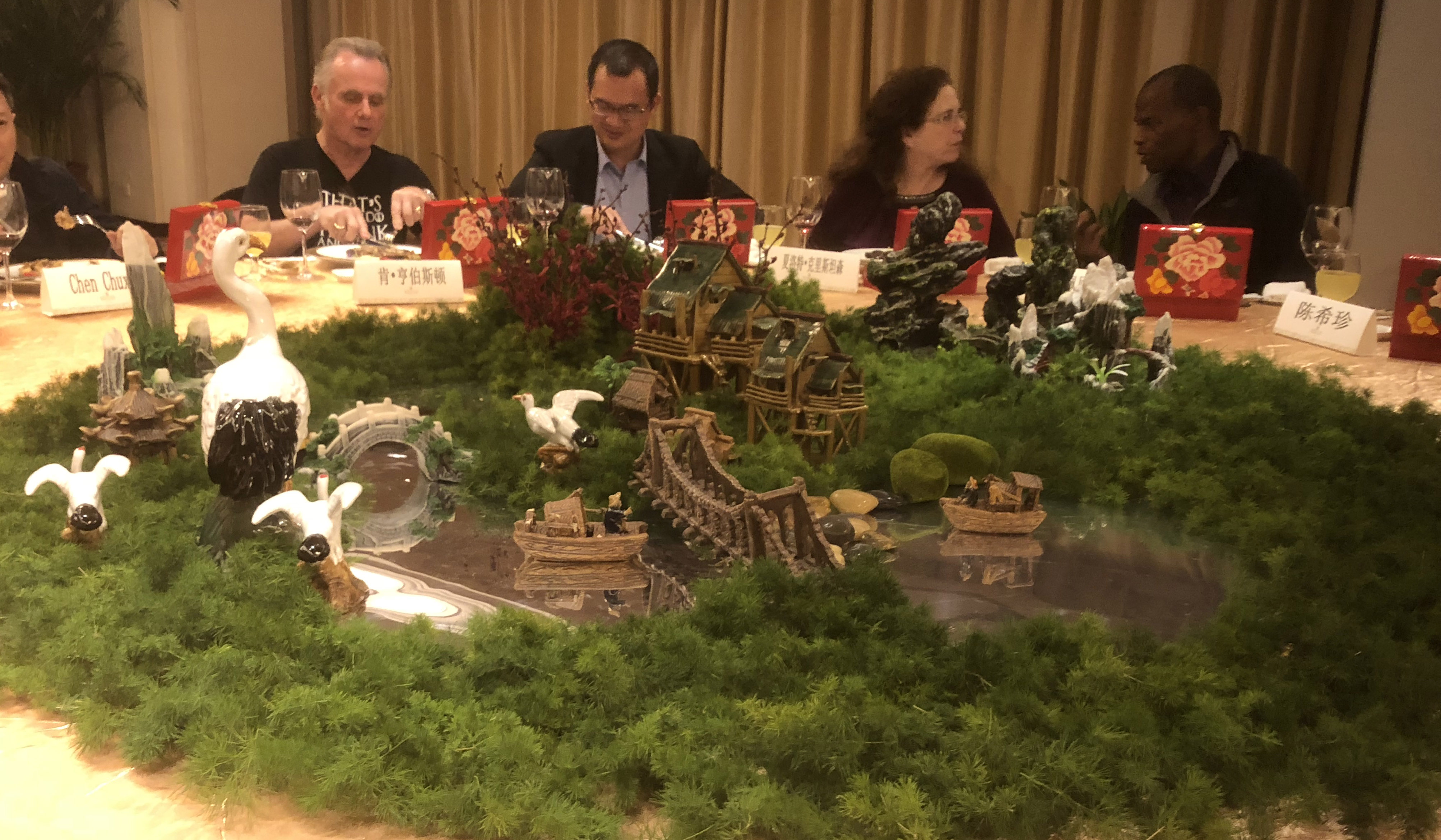 That night, the Fujian provincial government hosted a final dinner for our group. It was a very special dinner, and many speeches and toasts spoke of the 35 years of friendship between Oregon and Fujian, a relationship that was started under the leadership of former Oregon governor Vic Atiyeh.

I’m back in Oregon now, and while I’m very glad to get home, I also have a new appreciation of our friends from across the Pacific who build huge cities with giant apartment buildings, have a great respect for trees and love wood. There just has to be a way they could build these buildings out of Oregon mass timber.