〈 Back To Articles
Wood is safe 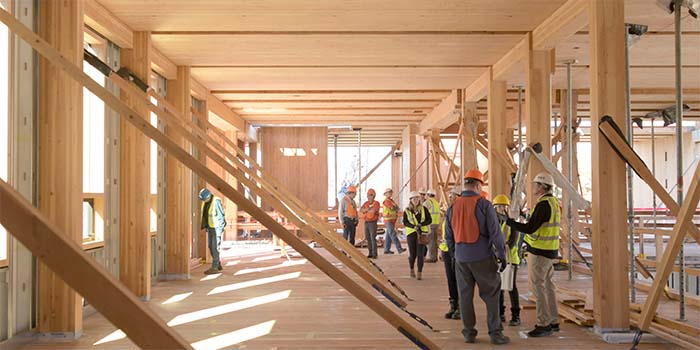 It’s Forest Products Week, both nationally and here in Oregon. It’s also the week the International Code Council kicks off its public comment hearings on proposed code changes to the International Building Code – which, if approved, would allow mass timber buildings up to 18 stories and 270 feet tall.

So, what better time to talk about mass timber, human life safety and fire-performance testing?

The International Building Code, which forms the basis for building codes in virtually every jurisdiction in the country, is designed to protect public health, safety and general welfare as they relate to the construction and occupancy of buildings.

Recognizing the growing interest in using CLT in a wider array of building types, including wood buildings that are taller than current code allows prescriptively, the ICC established an ad hoc committee in 2016 to explore the building science of tall wood buildings and develop proposed code changes for tall wood buildings. Those proposed changes are to be voted on during the current cycle, and they are a subject of discussion at the public comment hearings this week. The committee comprised members of competing building materials industries, including wood, steel and concrete, along with building and fire officials, architects and engineers, and other construction-related stakeholders. The American Wood Council (AWC) has published an online learning course about the committee and its proposals here.

In the end, that committee proposed 14 code changes that would create three new building types. Specific provisions can be found here. During initial hearings in April, the ICC overwhelmingly approved those proposed changes, paving the way for this week’s public hearings.

It’s important to note that everyone involved in the process takes very seriously the fire safety concerns that many have raised. That’s why a wide range of CLT and other mass timber assemblies have been subjected to significant fire testing, including full-scale fire tests of two-story furnished CLT structures. These tests were conducted by a team of fire experts from the U.S. Bureau of Alcohol, Tobacco, Firearms and Explosives (ATF), alongside scientists from the U.S. Forest Products Laboratory.

For decades, fire engineers have understood that even though wood is combustible, the sheer size of mass timber products gives them a degree of fire resistance. When they burn, a char layer is formed that protects the inner portions of large timber from the heat of the fire. It’s the same phenomenon that allows large trees to survive forest fires. Knowing this, engineers often protect steel connectors from fire by encasing them in wood.

AWC has a nice summary of mass timber fire testing here, and Think Wood has a much more comprehensive look at wood-related performance testing here.

The science on mass timber’s fire safety is comprehensive and unequivocal: The testing shows that wood can and does meet all the fire safety requirements other materials must meet. Mass timber buildings are safe.

In recognition of this, Oregon has already taken steps to adopt the ICC ad hoc committee’s changes into the state’s 2019 Structural Code, which will take effect in October 2019. The state has also made the changes effective immediately through adoption of a Statewide Alternate Method. Washington state has legislation in place that embraces mass timber and calls for rapid enactment of code changes. California is not far behind. It’s time for the rest of the country to catch up.

Shortly after posting this blog, voting members of the International Code Council voted to approve all 14 proposed code changes put forward by the Tall Wood Ad Hoc Committee. Those changes will now be subject to the ICC’s online voting, the final step in the code change approval process. Read the announcement from AWC.