〈 Back To Articles
Sure, let’s go looking for bears! 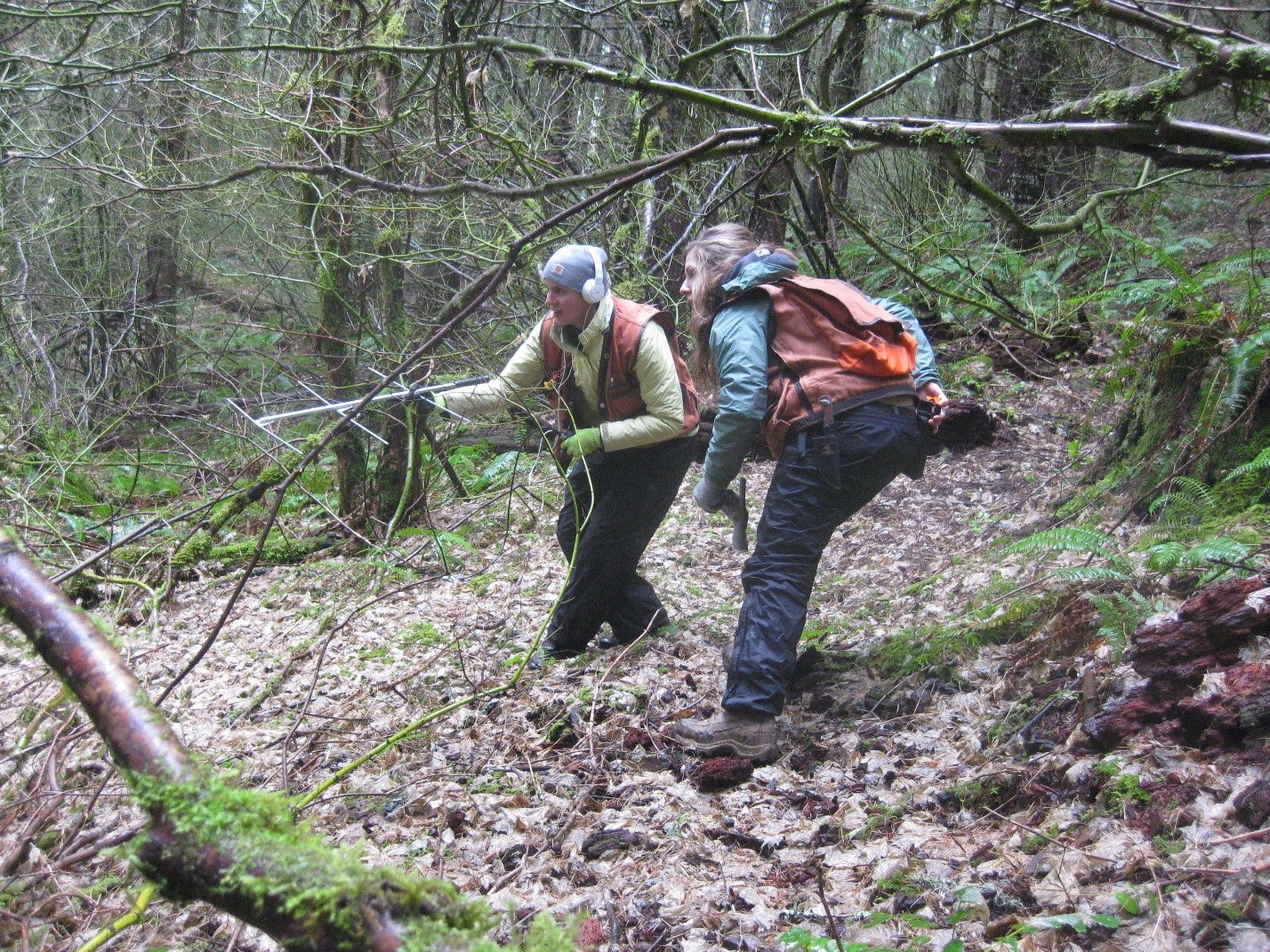 Vanessa and her field technician using radio telemetry to check out a potential den site.

It’s not often you actively head into the woods to look for a mama bear and her cub. That’s why when Vanessa Petro, a research wildlife biologist from Oregon State University, called and asked if I wanted to go with her, I ignored my inner voice of caution and enthusiastically told her, “Yes, absolutely!”

It was a misty winter in Oregon when we headed out in search of the female black bear and her cub in a western Oregon forest actively managed for timber production. Our purpose was to locate the bear in her den and document the den’s conditions – presumably without getting mauled.

Vanessa is studying bear habits in managed forests to learn why some of the estimated 25,000 to 30,000 bears that live in Oregon peel Douglas-fir trees. When they do, the damage kills Douglas-fir trees. This can cause a significant economic loss to forest landowners who planned to harvest the trees for timber.

Peeling appears to be a learned behavior that bears teach their young, but not all bears peel. Thanks to the work of researchers like Vanessa who are gathering more information, wildlife biologists might be able to predict where tree peeling could occur and perhaps find a way to manage bears in a way to discourage peeling. But there’s a lot more to learn before we reach that point.

My day in the field with Vanessa was exciting, and we did locate the bear and her cub. The entire time after getting out of the truck to track the bear in the forest using radio telemetry we had to be absolutely silent. As a rather chatty person, this was very difficult for me. I kept thinking of all kinds of questions and had lots of thoughts about what people would think about trying to sneak up on a mother bear and her cub all while we hiked as silently as possible through the woods toward a rather sleepy mother black bear with her cub. I stayed several steps behind Vanessa and her wildlife technician, who was, after all, carrying the bear spray.

We checked several potential sites. Then finally we located the bears! It happened so fast that I missed seeing the mother bear, but I did see a sleepy cinnamon-colored black bear cub stumble over a log and follow its mother to another den location.

We documented the den location, snapped a few pictures and then high-tailed it out of there. Admittedly, I looked over my shoulder a few times on the way out, but we weren’t followed. I’m sure the bears returned to their den. 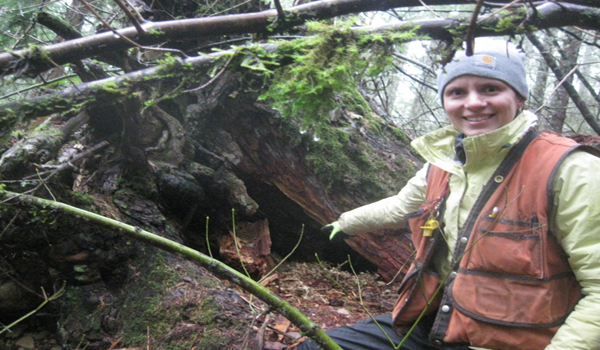 Vanessa points to the den where we located the female black bear and her cub.

On the car ride home, I reflected about the day. I learned so much from Vanessa. There are so many wildlife and forestry interactions, and they are complex. The biggest take-home for me was it is important to understand how wildlife are using their habitats so that we can manage for them in a way to promote them. It’s all part of sustainable forest management.