〈 Back To Articles
Forest-sector recovery dependent on markets and timber 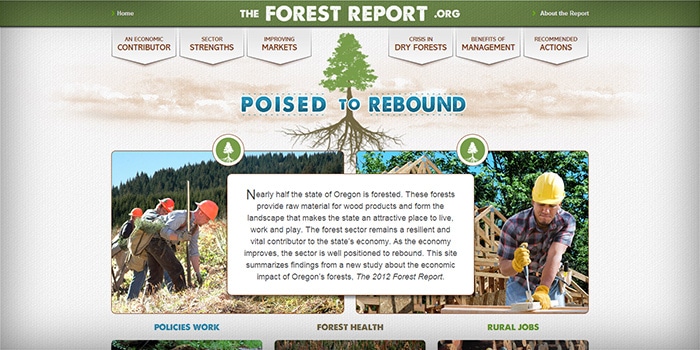 Forest products have long been an economic engine for the state. As a state agency charged with public education about the forest sector, it’s one of OFRI’s core competencies to lead a deep dive into the sector’s strengths, weaknesses and opportunities.

In October, OFRI published its assessment of the economic impact of Oregon’s forest sector. Titled “The 2012 Forest Report,” the 200-page study is the most comprehensive look at sector employment and economic impact in nearly a decade.

The findings may surprise you. For starters, the sector directly employs 76,000 Oregonians who earn, including benefits, a collective $5.2 billion. Another 37,000 people are dependent on the sector, providing it with services and supplies.

To be sure, the Great Recession has taken a toll. As new home construction tumbled from a high of 2.3 million housing starts nationally in 2005 to fewer than 500,000 starts in 2009, Oregon wood products manufacturers cut production. The sector lost 14,000 jobs and $527 million in income. But the housing market is slowly coming back; current data from the U.S. Census Bureau puts new residential housing starts at about 750,000 nationally.

The loss of jobs has been felt hardest in rural areas. Statewide, the sector accounts for 6.8 percent of the economy – $12.7 billion in total economic output. But in some rural areas, the sector represents well over 10 percent of a county’s economic output, employing hundreds of people. In northwest Oregon and southern Oregon, for example, one out of every 10 jobs is tied to the forest sector – twice the state average.

It’s no surprise, then, that one of the five recommendations of the study is to “Reassess and reshape policies for Oregon’s federal forests.” If Oregon’s rural areas are to fully emerge from the current recession, if they’re ever going to be financially independent, then state leaders must find a way to increase harvest in our federal forests – not only to supply raw material to sawmills and put people back to work, but also to manage our forests for ecosystem health and protect them from wildfire.

A summary of the study can be found at TheForestReport.org, where it is also available for download.