〈 Back To Articles
Some trees never seem to change; others change a lot 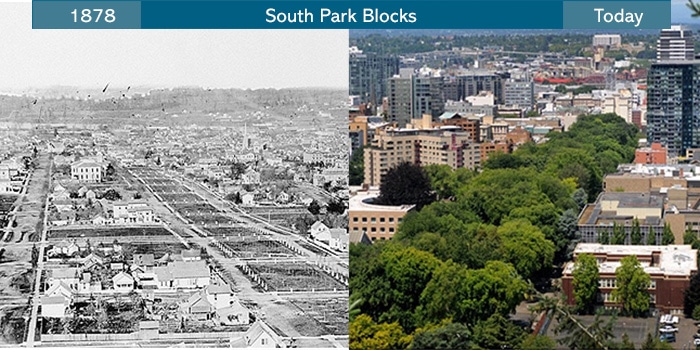 I moved to Portland in the late 1970s and went straight to work in a downtown office building. The Bus Mall, as it was known then, was fairly new. Red brick sidewalks lined the streets where public transportation was routed to give downtown a new focus. I’m told that in the 1960s, downtown Portland was much like other cities’ downtowns: dying from neglect and lack of interest. But business and civic leaders here had already laid the foundation for transformation, and planting trees was part of it.

The mall already seemed like a good idea to Portlanders; although I remember wondering if those spindly little sycamores planted there would make it. It seemed unlikely at the time.

Portland has changed a lot since then. Decrepit buildings have been removed, others renovated, scores of new buildings have changed the skyline, light rail rumbles past my office every few minutes and some of those little sycamores are now 50 feet high.

Back then, to get away from the hubbub, I frequently would walk the South Park Blocks while on lunch break. The lovely tall elm trees there seemed eternal. Most were planted in the 1870s; they didn’t change much year to year during the 1970s.

During July of this year, The Oregonian ran a front page feature on those elm trees, warning citizens that the tree-canopied South Park Blocks will be changing. Many of the trees are sick, rotted and generally unsafe. One recently fell, hitting someone, and another did serious damage to an old church steeple along the park. The city took notice and began inspecting them. The result is that many will come down, although not all at the same time. Time to replant!

I remembered that story as I walked through the South Park Blocks just this week. Sure enough, I saw a crew downing one and I found another closely cropped stump awaiting the grinder.

Urban forests make me optimistic. The trees may grow slowly but they provide a lot of pleasure to city folks, whether we realize it or not. Now, I wonder if a young fellow back in the 1870s felt the same way I did, as he watched workers carefully plant the elm trees in the South Park Blocks.

This reminds me of the old proverb: “The best time to plant a tree is 20 years ago. The second best time is now.” I’m thankful for the foresight of others. I’m also thankful that our state laws require reforestation after harvest.