〈 Back To Articles
Jobs in the woods 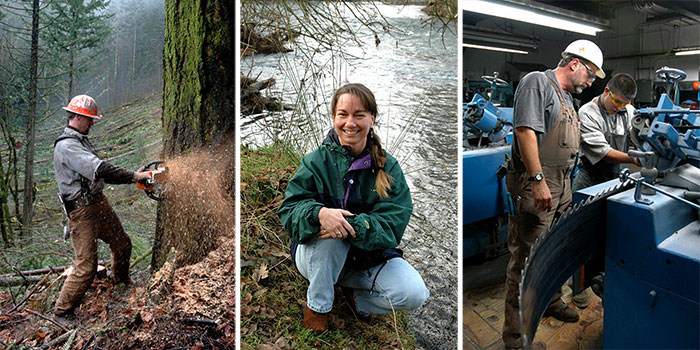 Flying back from family visits in Sacramento last week I could see from the airplane a substantial portion of Oregon’s 30.5 million acres of forestland. Not all of it, but quite a lot.

As we flew up I-5, I couldn’t see the invisible borders for timber-based counties, but from my perch I could see some of their cities and towns. As bad as the Great Recession has been for Oregon’s urban areas, smaller communities were hit sooner, harder and with longer lasting effects.

Because of the linkages between the urban and rural economies in our state, it’s been housing and forest sector-related employment that often led Oregon out of past recessions. That hasn’t been the case this time. Housing starts crashed nationwide from a high of 2.3 million starts in 2006 to a low of 478,000 starts in 2009. Currently, we’re limping along at about 750,000 housing starts per year on an annualized basis, or about half of what economists and others believe is a sustainable replacement rate for the United States.

Sawmills and other sector infrastructure have fallen the past few years, casualties of the recession. However, the forests have continued to grow and some mill owners have reinvested in their mills, betting that the economy will improve. One key to Oregon’s participation in the rebound will be greater access to federal timber, which encompasses about 60 percent of all forestland in the state.

There is growing recognition that millions of acres of our publicly owned forests, especially in eastern and southern Oregon, would benefit from active management to thin, remove biomass and supply sawlogs in order to restore forest ecosystem health. Many of the skills needed for this work are similar or identical to those jobs we think of automatically, but there are many more.

As Oregon’s economy begins to recover, it’s not just loggers and millwrights in small towns who will benefit. All of us will benefit from a renewed forest sector. And so will our forests.