〈 Back To Articles
Walk in the woods: Searching for the elusive spotted owl 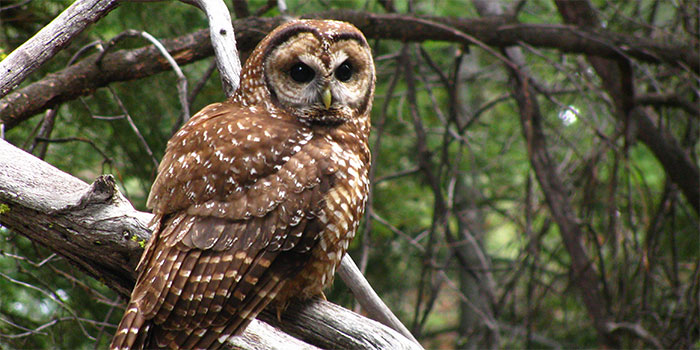 “Hello? This is an owl calling. Anyone home?”

No, it’s not the script for an annoying marketing call. Instead, it’s what I was doing on a recent perfect summer evening in the Douglas-fir forest of Oregon’s Silver Falls State Park, southeast of Salem.
Yes, making owl calls. “Owling,” in the vernacular.

I was teamed with Fran Cafferata Coe, a wildlife biologist hired by the Oregon Parks and Recreation Department to research whether any northern spotted owls still occupy this territory. Fran is also documenting all owl species within the park.

In the twilight, we headed down the trail. Our eyes and ears were turned on. As was our neat little boom box playing the pre-recorded owl calls.

The value of owl research
The spotted owl, a dark-eyed raptor with brown plumage and white spots, has been the subject of large-scale and long-term studies since it was listed as a state and federal threatened species in the 1990s. Along with research into the owl’s biology and habits, surveys are determining population numbers and establishing preferred habitat. The results of these surveys are especially important to landowners, who use them to make management decisions about creating and protecting spotted owl habitat in their forests.

In the woods, our job was to walk a designated eight-mile loop, stopping at 12 specified locations and calling for 10 minutes per station.

We traipsed without response for eight stations. Then, at the ninth station, boom! It was the haunting, eight-note hoot-hoot-wahoot, hoot-hoot wahoo of a barred owl. (Spotted owls employ a four-noted hoot-hootoot-hoo.)

Where are the spotted owls?
I flashed my light into the trees. The barred owl loomed about 25 feet above us, watching us as we watched him. I could have stayed longer, but Coe nudged me. It was time to move on to the next station. Our evening ended with the additional sighting of a juvenile barred owl flitting through the trees. No spotted owls seen or heard.
Are barred owls displacing spotted owls? Scientists are assessing this threat. Some think the barred owl’s adaptability and aggressive nature may allow them to more successfully compete for the spotted owl’s ecological niche. Others think spotted owls clam up in the presence of barred owls.
That may be so. On this night in the Oregon woods, I heard a hoot-hoot-wahoot, hoot-hoot wahoo but not a hoot-hootoot-hoo.
“Hoos” to know?