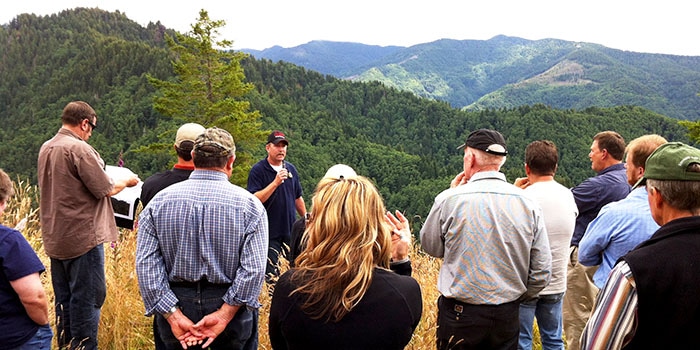 It may come as a surprise to new residents that Oregon has a long tradition of citizen governance. As a result, there are more than 200 citizen boards and commissions that oversee various aspects of the state’s business. Most of these positions are volunteer.

One we follow closely is the Oregon Board of Forestry. The board is made up of seven individuals appointed by the governor and confirmed by the state Senate. They meet about eight times a year, at locations throughout the state. Several times a year they go on “forest field tours” to become better informed about a particular issue. Meetings and tours are open to the public.

I attended the board’s recent meeting and tour, held July 26-27 in Tillamook County. The meeting took place at the Tillamook District Office, and it was jammed. In fact, the more than 100 people present exceeded the room’s capacity. People had to sit outside and listen to the meeting on a loudspeaker.

Why so much interest? The board was considering a staff proposal from the Oregon Department of Forestry to set aside and highlight portions of state forests for conservation values. Many conservationists, recreationalists and sport-fishers back the concept, and they were there to voice their support. By a 4-2 vote, the board approved a new category of state lands that will protect what are being termed “high-value conservation areas.”

The state owns and manages about 800,000 acres of forests. Some of the most productive lands are on the coast. These include the Clatsop, Tillamook and Elliott state forests. Providing oversight of these forests is one of the duties for Board of Forestry members.

In addition, the board supervises all matters of forest policy within Oregon, adopts rules regulating forest practices, appoints the State Forester (currently Doug Decker), and provides general supervision of his duties as he manages the Department of Forestry.

This is a tall order. The Department of Forestry employs more than 850 (full-time equivalent) people and has a $295 million biennial budget. Oregon is the nation’s third-most forested state, and forest products is one of the state’s largest traded sectors. Its impact on the state economy is huge. The board and the department have a big influence on the sector – so naturally there is a lot of public interest.

Board members may enjoy a picnic lunch on a field trip, but their service to the state certainly isn’t a picnic. Meetings start at 8 a.m. and run past 5 p.m. They often meet with constituents afterward, and then get up early the next morning to go on a forest field tour. Did I mention that they’re unpaid?

As Oregonians, we owe a debt of gratitude to Board of Forestry members and other volunteer board members who oversee our state agencies on behalf of us all.

Photo: Tillamook District Forester Dan Goody addresses members of the Oregon Board of Forestry and the public on a tour of the Tillamook State Forest at a tour stop overlooking Dry Creek and Cook Creek.