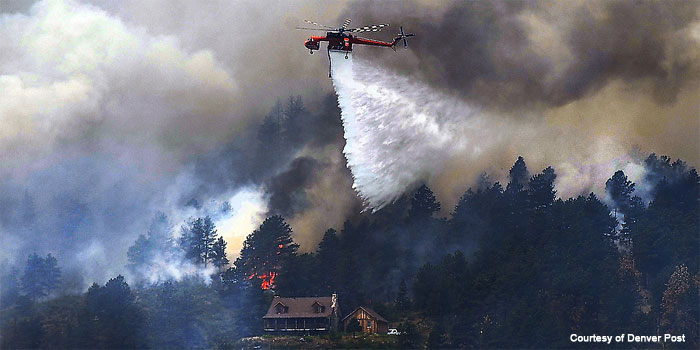 The pall of smoke yellowed the sky along the Front Range of the Rockies. We could see it from our west-facing windows as our jet approached Denver from the north. It was the last week of June, and my wife and I were flying to Colorado for vacation. We’d heard about the fires, but their reality hit much closer to home as our plane descended.

The High Park fire, as it was known, west of Fort Collins, eventually would destroy 259 homes and consume more than 87,000 acres of forest. At the time, it was already the most destructive forest fire in the state’s history in terms of property damage.

Like a forest burning out of control, that dubious record would stand less than a week. Three days later, at our campground in the beautiful Maroon Bells area near Aspen, our campsite neighbors told us about another fire, this one near their home in Colorado Springs. They were abruptly ending their vacation and heading home, as news of the Waldo Canyon fire had spread and families were being evacuated. We can only hope theirs was not one of the nearly 350 homes destroyed.

Devastating fires understandably generate sympathy and grab headlines. But intense and large wildfires in the forests of the West are becoming the norm rather than the exception. Scientists and policy experts have been warning us about this for years. It’s become a question not of if, but of when and where the next one will occur.

While I was in Aspen, the Aspen Center for Environmental Studies sponsored a symposium on Forests at Risk. I was able to attend the symposium’s afternoon session, and I took away two main points. One, the problem is huge. Two, we can fix this thing.

Most stakeholders in the room generally agreed on both the problem and what needs to be done. A major theme was the use of collaboration as a landscape restoration strategy in an era of federal fiscal restraint.

Harris Sherman, under secretary for natural resources and environment at the U.S. Department of Agriculture, presented a keynote (on video from Denver, where he was coordinating the federal fire response) on the US Forest Service’s push to accelerate restoration through public-private partnerships. The key, he said, was to “connect the dots” between forests and their beneficiaries, including water providers, electric utilities, insurance companies, corporations, adjacent landowners and recreational users.

His point makes sense: It’s a lot cheaper to restore forests proactively than it is to deal with the aftermath of catastrophic wildfire. And the federal government can’t do it alone.

The Oregon Forest Resources Institute offers terrific resources to understand these critical issues. In particular, check out the OFRI special reports “Federal Forestland in Oregon” and “Fire in Oregon’s Forests.” Both of these, as well as many other publications, fact sheets, videos and DVDs, can be downloaded or ordered at the Learning Resources section of the OFRI website. Most are free.