〈 Back To Articles
A superstar among us 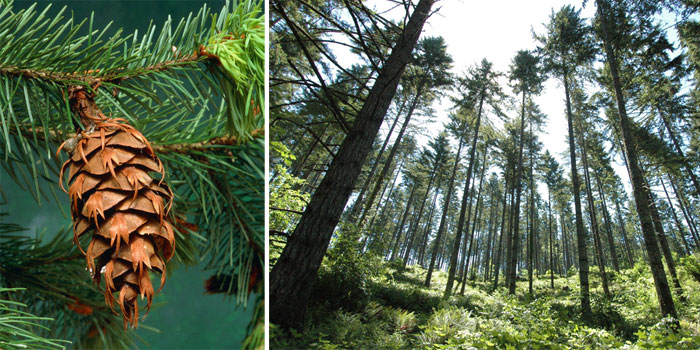 If you live in Oregon’s western “wet side” you are surrounded by a rock star of a tree, the Douglas-fir. If you live on the drier side of the Cascades, or even in the interior southwestern portion of the state: Fear not! Douglas-fir is there in large numbers too.

In the western portion of the state, thick stands of Douglas-fir dominate the forests around us, but it’s not the only tree in the woods.

Oregon has about 13 different kinds of forests that include leafy urban forests, ponderosa pine, mixed conifers, western larch and oak hardwood forests, to name a few.

But it is the towering Douglas-fir that more often inspires, reaching heights second only to redwoods. In older stands, it presides over lesser trees in perfect harmony. In managed stands that carpet the western Oregon landscape, trees exceeding 100 feet are the norm.

Douglas-fir is the emergent species after disturbance. That is its ecological role. Wildfire can destroy these forests, and wind can also topple whole stands of Douglas-fir that are not sheltered from storms that sometimes pound our coast and infiltrate our valleys. It is the emergent species because it loves the sun and, left to its own, would colonize about 80 percent of the landscape in western Oregon mountains and valleys after fire.
Early settlers recognized the structural properties of Douglas-fir, which has great strength and beautiful, warm grain. Neighborhoods throughout the West are imbued with charm because this wood is so readily adapted to many styles and forms, and because it is available.

The other day, my wife and I ate at a pizzeria housed in an old building. The joists and beams were made from what looked like 12”x16” Douglas-fir timbers that easily support this fine old structure. Later, I looked at the I-joists supporting our modern home. Certainly not the same thing, but still made of Douglas-fir and other composites because they are strong, lightweight and beautiful.

The new library near my home is made largely from wood. It is the kind of place you want to visit and linger. The reading room is magnificent in part because the structural materials are made from composited Douglas-fir.
If you want to learn more about this magnificent native species, visit OFRI’s online tree guide at OregonForests.org.