Native tree diseases are a particularly common menace to Oregon’s western forests. Among the most prevalent diseases in Oregon are Swiss needle cast and laminated root rot. Swiss needle cast is a foliage disease that affects Douglas-fir trees. It causes trees to prematurely shed their needles.

Laminated root rot attacks and kills a tree’s root system. This hinders its ability to suck up water and soil nutrients. Trees affected by root disease are also more susceptible to bark beetles and wood borers, and are more likely to fall during a storm or high winds.

But there are ways to combat and prevent the spread of tree disease with active forest management. For instance, planting hardwood tree species such as alders that are not affected by root disease is one way to fight the pathogens. Other management techniques to treat root disease include harvesting a buffer around diseased trees, and breaking the chain of root contact between infected and healthy trees through thinning.

Tree diseases such as Swiss needle cast and laminated root rot threaten the health of Oregon’s forests, but active forest management helps prevent or slow the spread of these diseases.

Parasitic, flowering plants that can slow tree growth, deform crowns and branches, and eventually kill the trees in which they grow.

Caused by fungi that infect tree leaves or needles and cause them to fall prematurely from the tree. In the case of foliage diseases known as needle blights, the dead or partially dead needles often remain attached to the tree’s branches.

Caused by fungi and pathogens that attack and kill a tree’s root system. Trees affected by root disease are more susceptible to bark beetles and wood borers, and are more likely to fall during a storm or high winds.

Localized areas of dead bark on a tree branch or trunk are caused by fungi that destroy the inner bark and kill branches and entire trees. White pine blister rust, a stem canker caused by a non-native fungus, has devastated five-needle pine trees growing in Oregon.

Caused by fungi that enter trees through wounds or small branches.

A non-native pathogen that has killed hundreds of thousands of tanoak trees on the southern Oregon coast. It has a wide host range and can cause branch dieback and leaf spots on many native plants and trees, including Douglas-fir trees. 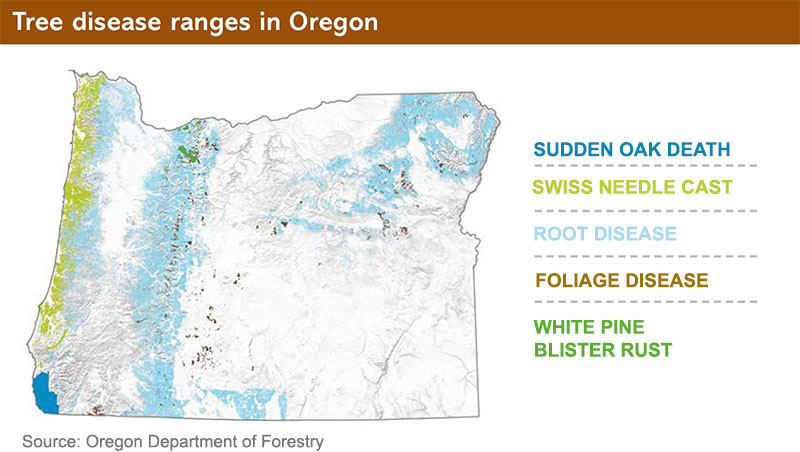 Related Content
Forest Threats
Oregon’s forests provide a host of benefits to our state, including clean air and water, fish and wildlife habit...
Forest Threats: Insects
Oregon is a great place to grow trees, especially the sturdy conifers we use to build our homes and office build...
Herbicides
Oregon is one of the best tree-growing regions in the world, but even our fast-growing, native species such as.....
Thinning
An acre of land can only grow so many trees. One acre of fertile forestland may be able to sustain 500 small tre... 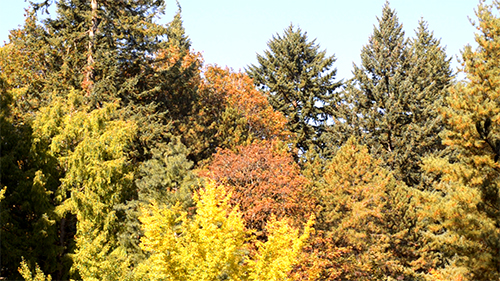 Planting a mix of tree species can help limit the spread of many tree diseases.