Climate change amplifies the effects of forest threats, such as fire and insects. Rising temperatures and prolonged droughts in some parts of Oregon are impacting forests in a number of ways, according to researchers from Oregon State University’s College of Forestry and Portland State University’s School of the Environment. This includes contributing to longer, more intense fire seasons and increased insect and disease outbreaks.

Climate change may even reshape the makeup of Oregon’s forests in some areas, as conifer trees that need more moisture to live have a harder time surviving. In other regions of the state, such as northwestern Oregon, climate change models show increased moisture in the future.

More intense storms and extreme weather caused by climate change could also have lasting impacts on forest health. Tree with limbs that are snapped off in storms are more prone to insect and disease outbreaks. Freshly downed trees and branches attract bark beetles and could fuel a wildfire.

The good news is that the impacts of climate change can be lessened with active management, especially through forest restoration, thinning and fuels reduction for wildfire resiliency.

Forests also serve a vital biological role in mitigating the effects of climate change, because trees absorb and store carbon through photosynthesis. This carbon continues to be sequestered even after a tree is harvested and manufactured into wood products.

Storms and severe weather can have lasting impacts on forest health, but active forest management often minimizes the damage.

Related Content
Forest Threats: Severe Weather
Storms and severe weather can have lasting impacts on forest health, but active forest management often minimize...
Carbon Capture
Increasing amounts of carbon dioxide in the atmosphere, mostly from humans burning fossil fuels, are contributin...
Mass Timber Building
Oregon is at the forefront of a growing movement in the U.S. to construct more commercial and multifamily buildi... 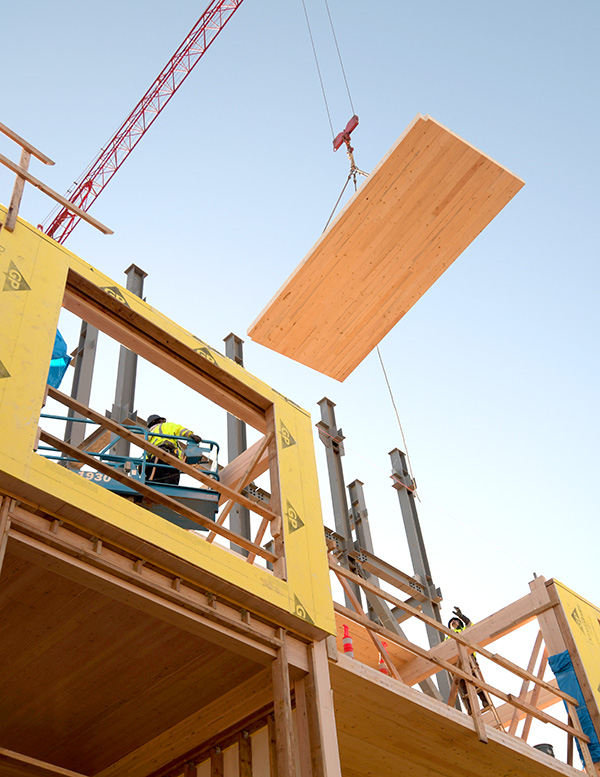 Choosing wood for large buildings is a better environmental choice than steel or concrete. That’s because trees create wood using the power of the sun, and grab carbon right out of the air. The carbon remains locked away long after it’s turned into wood products.