Oregon is doing it right

"We do forestry right in Oregon, and we should all be proud of that."

That's what Sara Wu, the director of the World Forest Institute, said when accepting the International Business Award from the Oregon Consular Corps (see story).

What a refreshing comment. In an era where lawsuits against forest landowners still make headlines, Sara's comment is a great reminder of how far the forest sector has come. That's not to say we always get it right or there isn't more to learn. We're learning every day, and forest practices change to keep up with the times.

As we built our new website, I was amazed to learn that the Oregon Legislature has amended the Oregon Forest Practices Act 20 times since it was first passed in 1971. And the Oregon Board of Forestry has modified the administrative rules and regulations dozens of times to meet the law's requirements.

That means that as new science and experience have come to light, our citizen legislature and citizen board - as well as forest landowners - have embraced change to make sure we protect our precious natural resources for future generations. That the act has changed and become stronger is a sign of health.

It shouldn't surprise anyone that forestry scholars from around the world come to Oregon to intern at the World Forest Institute, located at the World Forestry Center near Washington Park. Oregon is "ground zero" for advanced forest management practices. What we do here has influence far beyond our state borders. And that's something of which we can all be proud.

More 〉
Get outside! 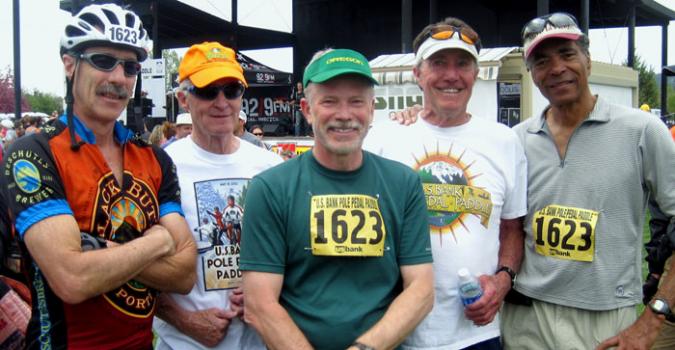 This past weekend, May 19 and 20, kicked off Oregon’s summer recreation season.

In Portland, 14,000 ran the inaugural Rock ’n’ Roll Portland Half Marathon. On the upper Clackamas River, more than 100 enthusiasts participated in what’s claimed to be the oldest rafting and kayaking competition in the Northwest.

And in Central Oregon, where I was, the U.S. Bank-sponsored 2012 Pole Pedal Paddle attracted nearly 3,000 participants and thousands of spectators to Bend’s biggest annual event.

Whether you ran through Tom McCall Waterfront Park, rafted the Clackamas River or bicycled the Cascade Lakes Highway, you experienced world-class fun.

Oregon is practically the world capital of outdoor recreation. Oregon forests, mountains, rivers, streams and trails beckon visitors from around the world.

OFRI’s new website helps those who want to experience Oregon firsthand. On our Get Outside & Experience page, you can get tips on hiking, camping, foraging, hunting and fishing, or exploring our forested urban parks.

When you get into the forest, chances are that you’re going to learn something about forest management. That was the case on the drive from Bend back to Portland: West of Sisters, my wife and I came across what’s called a “controlled burn.”

I hope you have the opportunity to get outside and enjoy Oregon’s amazing forests very soon.

Send me an email.

More 〉
The alchemy of photosynthesis

The arrival of spring (finally!) reminds us of the restorative power of nature, powered by what some have described as the alchemy of photosynthesis. Practically overnight, barren plants and trees have exploded hysterically into a thousand or more shades of green.

Considered the medieval precursor to modern-day scientists, alchemists attempted to turn base metals such as lead or copper into gold or silver, as well as invent an elixir of life that could confer youth and immortality. Though doomed to failure, such efforts did open the way to the scientific method.

For the non-scientists among us, the appearance of spring is a near-miraculous transmutation. But for those educated in the natural sciences, spring is the inevitable result of plant biology.

In photosynthesis, green trees and plants use solar energy to transform water, atmospheric carbon dioxide and minerals into organic compounds needed for growth, releasing oxygen in the process. Trees continue to store significant amounts of solid carbon when they are old. Moreover, wood products continue to store carbon throughout their useful lives.

Photosynthesis is one of the most researched topics on OFRI's website. You can learn more about it and carbon storage from OFRI's fact sheets and video Forest Fact Breaks.

The benefits of photosynthesis are so remarkable that if such a system had not existed already, we would have had to invent it.

The signs are everywhere.

That’s one of the catch phrases of OFRI’s educational advertising now airing in the Portland metropolitan area. See the ad called “Signs” at Learning Resources.

“Oregon has a reputation for growing some of the world’s finest timber,” the announcer begins. She mentions Oregon’s strong laws that require landowners to replant and protect natural resources. “You can see how well it’s working across Oregon,” she concludes. “The signs are everywhere.”

In addition to growing timber, Oregon has a reputation for colossal winter storms. In December 2007, the Great Coastal Gale of 2007 whipped across Oregon, Washington and British Columbia with sustained hurricane-force winds topping 130 mph. Gusts toppled trees like toothpicks, taking out power lines and blocking highways. Preceded by snow and frigid temperatures, the tropically affected gale spiked temperatures that melted the snow and resulted in severe flooding. Five people lost their lives in Oregon.

Some sources compared the storm’s intensity to that of the Columbus Day Storm, which caused widespread wind damage to the Pacific Northwest in October 1962, and the Willamette Valley Flood of 1996, which produced widespread flooding. A casualty was the 700-year-old Klootchy Creek Giant, once the largest Sitka spruce in the world.

Near that location, just west of the junction of Highways 101 and 26, the storm lashed out at private forestland, snapping managed Douglas-fir, hemlock, spruce, alder and western redcedar. Afterward, the forest looked like a gigantic game of pick-up sticks.

Since then, the landowner has salvaged the fallen timber and, as required by Oregon law, replanted. It looks a lot better now than it did in December 2007.

OFRI helped the landowner install a sign on the storm-ravaged site that tells the story. At the recent Oregon Society of American Foresters meeting on the North Coast, Seaside Mayor Don Larson said the sign really helps to educate coastal visitors about forest management.

Forest landowners should consider more such signs. Travelers to Oregon forests want to know that trees are being replanted, and they enjoy watching the trees grow.

Reach me at [email protected].

More 〉
〈 Back   1 .. 64 65 66 67 68
Related Content
About OFRI
In 1991, the Oregon Legislature created OFRI to support and enhance Oregon's forest products industry.
People
OFRI partners with more than 100 organizations and individuals on our educational programs, publications and vid...
News & Social
Stay up to date with the latest OFRI happenings and news about forestry education in Oregon
Video Library
The Oregon Forest Resources Institute produces a wide variety of educational videos covering a range of topics.....