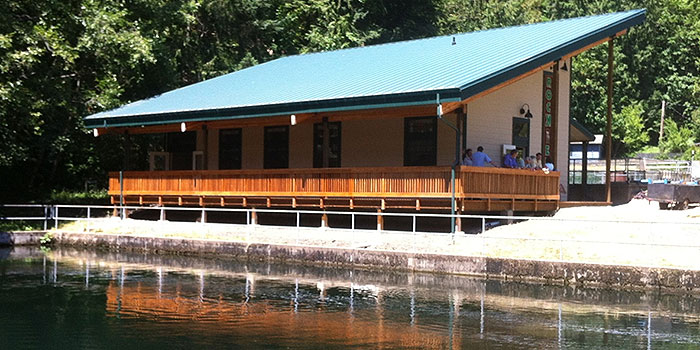 In a modern-day example of an American barn-raising, businesses, volunteers and students came together to build a new natural resources education facility named “Rock-ED” on the grounds of the Rock Creek Fish Hatchery, about 30 minutes northeast of Roseburg.

Construction of the building was a cooperative effort through the Joe Merchep Umpqua River Foundation. Eleven local mills donated construction materials manufactured in Douglas County to build the structure. The interior of the classroom features 13 native wood species found in southern Oregon. Five students from Roseburg High School’s drafting class contributed the initial design. The facility received support from more than 300 donors and will be maintained on Oregon Department of Fish and Wildlife property for natural resource conservation and stewardship education activities.

The 1,300-square-foot facility features a large and well-lit classroom wired for electronic media, a reception and display area, a 200-gallon fish tank and a covered deck overlooking a pond. A restroom stands nearby, with a soon-to-be-built gazebo planned as an outside gathering place. A half-mile interpretive trail takes visitors into public forests and back along Rock Creek. The facility offers endless opportunities for educational experiences for people of all ages.

Jake Gibbs, a senior policy advisor for Lone Rock Timber and a member of the Rock-ED steering committee, estimates the value of the building at more than $300,000. However, donated materials brought the cost down considerably. Many businesses and community members contributed significantly to the site development and construction of this ambitious project over the past four years. Gracious grant support from several organizations filled the funding gaps needed to build the outdoor education site.

“Many of us have felt for a long time that to conduct an effective K-12 educational outreach program in Douglas County, we needed a permanent structure,” Gibbs says. “Rock-ED delivers that in spades. The tie-in with the hatchery is a natural, the setting is beautiful and the structure is first class. Now we just need to get the word out to the educational community about its availability.”

In the first month since its mid-July grand opening, more than 3,000 people visited the hatchery and Rock-ED facility. Four educational events took place in the classroom this summer, and the new school year is just around the corner, with many teachers ready to plan a day with students at the site.

The hatchery is now taking reservations for use of the facility. For information, contact Dan Meyer, ODFW, at 541-496-3484 or [email protected] Check out the website for more details, and feel free to add your comments about the project to help Rock-ED plan for future improvements. 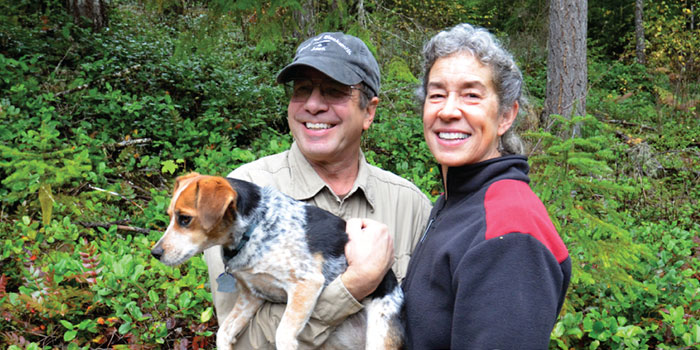 The most underappreciated group of forest landowners in Oregon is families. At least, that’s my opinion. The green forests that fringe our valleys and cities, especially in western Oregon, are nearly all family forestland. (See the purple-shaded areas on the map below.) More than 60,000 families own forests between 10 acres and 5,000 acres. That acreage is the state’s definition for “family forestland,” although most own fewer than 100 acres. 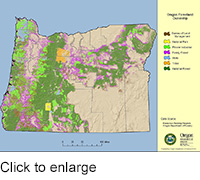 Oregon’s family forests close to our cities and towns protect water quality and fisheries, and provide substantial amounts of prime wildlife habitat. And, unlike in other states where forestland is more easily developed into homes and strip malls, Oregon’s unique system of zoning and land-use laws protects forests and agricultural lands.Nearly 250,000 families own forests if you count large backyards of at least 2 acres of trees.

I’ve visited many of these family-owned parcels, and they are remarkable. Some people manage them almost like family parks; others manage them for spurts of timber income, generally timed to the needs of kids going to college or retirement. They are a place of refuge for those living on them – and the best ones are managed under a plan. Resources such as the Oregon Small Woodland Association and the Oregon Tree Farm System can help landowners get started.

There is a long heritage: Families own 15 percent of Oregon’s 30 million forested acres, and it is the lowest elevation, most productive forestland in the state. Many people can trace their ownership back to the Donation Land Claim Act of 1850 that brought settlers to the Oregon Territory. Interesting to me is that this pre-Civil-War legislation allowed settlers to get, at no cost, 320 acres of land; or married couples, 640 acres of land.

Today, women own more than 40 percent of family forestland, and they call the shots. Another interesting statistic is that the average age of a family forest landowner is 65. That means that a heckuva lot of this land will be changing hands fairly soon, and that is worrisome for both landowners and their families.

Fortunately for Oregon family forest landowners, there are tremendous resources that can help.

For instance, several years ago, OFRI teamed with state and federal resource agencies, inheritance experts andOregon State University to help build a program called “Ties to the Land,” now managed by the Austin Family Business Program within the OSU College of Business. It is a great place to get started if you are wondering how to manage generational succession. (Tip: Engaging the next generation is critical to building ties to the land.)

Just this year, OFRI has doubled down on its commitment to family forest landowners. In January, we teamed with many of the same state and federal resource agencies, known collectively as the Partnership for Forestry Education, to jointly launch a new website called KnowYourForest.org. Please cruise around this site to see how families can access resources of all kinds to help with their forestland.

Coming soon, OFRI will publish a new booklet called Establishing and Managing Forest Trees in Western Oregon. You can see a download of it now. This publication complements an earlier publication called Understanding Eastside Forests. You can also find a publication called the Family Forest Landowner Resource Guide, a new version of which will be published later this fall.

Many families cherish the wildlife on their lands, and this year OFRI has published a new booklet in its Wildlife in Managed Forests series, this one called Deer and Elk.

Other publications in the Wildlife in Managed Forests series include Northern Spotted Owl, Stream-Associated Amphibians and the capstone publication, Oregon Forests as Habitat. Together, these publications – along with workshops, tours and conferences – are designed to help Oregon family forest landowners understand the implications of forest-management decisions on wildlife.

If you are a family with forestland – and don’t have a plan – it is never too late to get started. If you are an urban dweller and wonder about the forests you see in the valley, take heart, for families just like yours are managing a lot of things you like about Oregon. 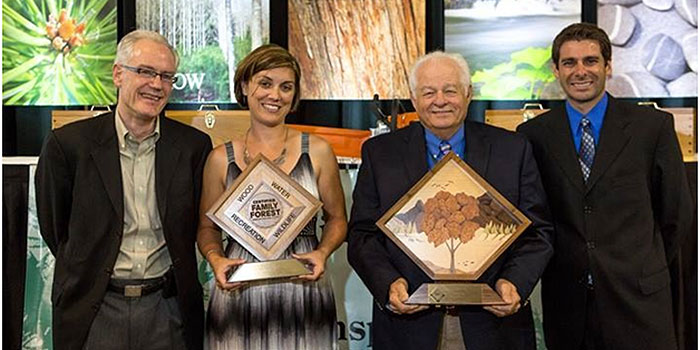 Jamie, an Oregon Department of Forestry stewardship forester working in La Grande, completed 11 inspections in 2012, and has a long history of Tree Farm volunteering and other activities in support of family forest landowners and stewardship of Oregon’s forests.

Jamie has a number of duties for ODF in Northeast Oregon. She manages the Private Lands Forest Network, a private nonprofit organization that provides seedlings, cold storage for seedlings, tools and technical advice to landowners in northeast Oregon and parts of southeast Washington.

Jamie is also the local manager of the Blue Mountain Western Larch Cooperative Orchard. Still in its infancy, the cooperative’s goal is to grow grafted larch in an orchard setting and meet the seed shortfalls that are being felt in northeast Oregon and southeast Washington.

Jamie’s work includes many Tree Farm landowner visits and inspections. In addition, she has played a major role in assisting the two most recent Oregon Outstanding Tree Farmers of the Year from northeast Oregon Chris and Donna Heffernan and Harry Merlo as well as host tours and help complete their applications for Western Regional Tree Farmer of the Year.

Inspectors are vitally important to the Oregon Tree Farm System. Nearly 900,000 acres on 764 properties are certified in Oregon as meeting the American Forest Foundation Standards of Sustainability for Forest Certification. All these properties have been inspected and certified by Tree Farm Inspectors.

More information on the Oregon Tree Farm System is available at www.otfs.org

Congratulations, Jamie! Oregon’s tree farmers are very proud of you! 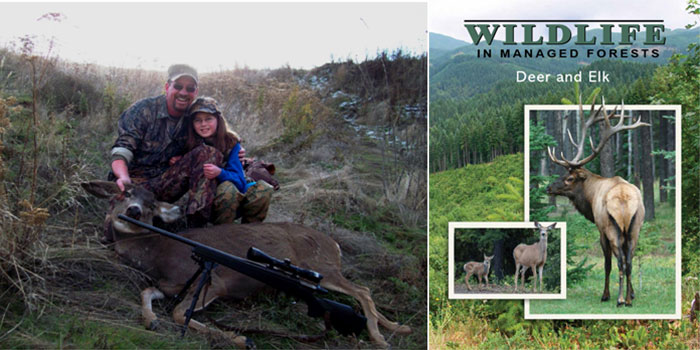 My niece Makenna is an all-American 13-year-old girl living in Salem. She enjoys playing volleyball and basketball. She is an honor student and active with her church youth group. She is also an avid deer hunter. She started going on hunting trips with her dad when she was old enough to walk. When she was 12, she shot her first deer at more than 200 yards. She says that she loves seeing deer and elk in the forest, but hunting gave her even more appreciation for their speed, agility and ability to hide. Her favorite part of hunting is not the final act of shooting the animal, but the time she spends with her dad.

Big game hunting is an important heritage that provides an opportunity for multiple generations to share a tradition and connect to the land. Just over a century ago, most states had issued moratoriums on big game hunting due to scarcity of animals from uncontrolled hunting. The Rocky Mountain Elk Foundation and numerous other organizations have spent millions of dollars on habitat restoration and reintroduction. Forest landowners and forest sector organizations in Oregon also spend time and money investing in wildlife habitat and research. Many forest landowners have a love-hate relationship with the deer and elk that are present on their lands. They love seeing the majestic animals and may be avid hunters themselves. But deer and elk can cause havoc and destruction of trees, especially newly planted forests. In 2012, more than 70,000 acres of private timberland were impacted by deer and elk damage, as reported by the Oregon Forest Industries Council.

A recent publication by OFRI, Wildlife in Managed Forests: Deer and Elk, took a closer look at the challenges of managing for sustainable deer and elk populations, along with other desired forest outcomes. Research is questioning the impact that management changes on federal forestlands may be having on deer and elk distributions and whether the changes are placing more pressure on private landowners. The answer is not simple, but the publication offers some of the latest scientific findings and possible solutions for land managers. The Starkey Project, located in northeastern Oregon, began to conduct long-term research on specific management questions in 1987. The publication offers advice on thermal cover, information about winter and summer forage, and responses from deer and elk after fuel reduction projects.

Oregon is a special place with our four deer and two elk species. Whether you will enjoy tracking them this hunting season or viewing them from one of our premier reserves, the most important thing that many Oregonians can do to promote wildlife habitat is to keep forestland as forests.