Insects are small, but they pose a big threat to Oregon’s forests.

Pests such as bark beetles can detect when a tree is stressed from drought, root disease or storm damage. That’s when they attack, burrowing through tree bark to lay their eggs. Bark beetles often kill trees that are already suffering, and the results can be devastating, especially in central and eastern Oregon.

Entire forests in Oregon are affected by species such as the mountain pine beetle. Other types of insects that can cause major damage to forests include wood-boring beetles, which typically bore directly into the sapwood, and caterpillars that voraciously feed on foliage.

Often, an insect infestation is the final nail in the coffin for a tree that’s already unhealthy because of root disease or another factor. Active forest management that helps keep trees healthy is often the best defense against insects. This could include thinning to give the healthiest trees thebest chance to thrive, and clearing away the woody debris left after a timber harvest, which can harbor insects.

Planting native trees that are adapted to the climate and soil or cultivated to be resistant to certain diseases also improves a forest’s chances of surviving an insect infestation.

Oregon is a great place to grow trees, especially the sturdy conifers we use to build our homes and office buildings. But our forests are vulnerable to multiple threats. Join Mike Cloughesy, director of forestry at the Oregon Forest Resources Institute, to explore some of the threats facing Oregon’s forests, and see how active forest management is helping combat these threats.

Bark beetles
Rice-size insects that as adults burrow through tree bark to form galleries where they lay their eggs. After hatching, the larvae chew the inner bark, girdling the tree by cutting off its vascular tissues.

Defoliators
Moth and butterfly caterpillars or sawfly larvae that voraciously feed on conifer foliage or buds. 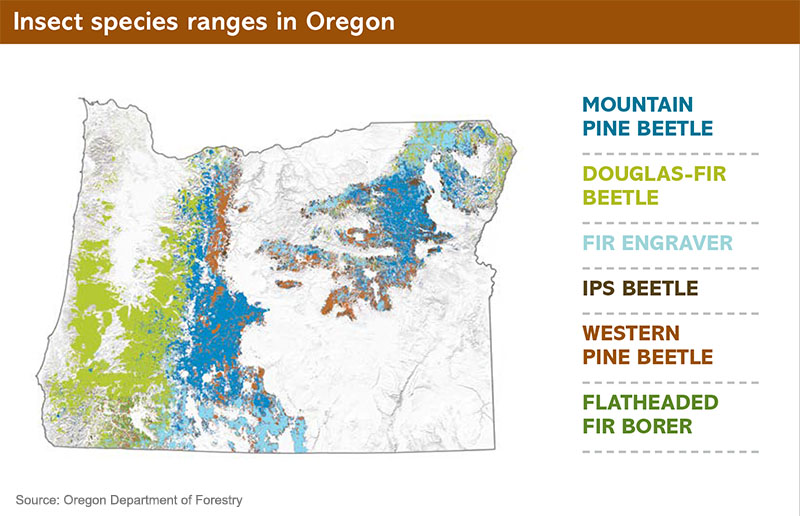 Related Content
Forest Threats: Forest Fire
Fire can be a particularly destructive threat to Oregon’s forests, but active forest management can help lessen ...
Forest Facts & Figures
Every two years, the Oregon Forest Resources Institute compiles the latest data on Oregon’s forests into a detai...
Thinning
An acre of land can only grow so many trees. One acre of fertile forestland may be able to sustain 500 small tre... 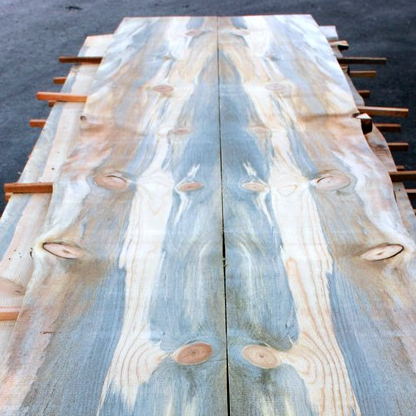 Pine beetles introduce a fungus to vulnerable trees that turns the wood blue. Aesthetically, it’s distinct. Structurally, it is no different from the unstained pine wood.